Moneyball at The Academy

It’s the middle of the summer, and it’s time to check in with the I&E Reading Group. This summer, we have Michael Lewis’ Moneyball and Louis Menand’s Marketplace of Ideas. If you need a copy of either, I know we have them at The Mudd.

For our first book, Lewis provides us with a look at the world of baseball management. I would suggest that the money point of Moneyball has to do with the tension between quantitative tools and “experts” watching and assessing potential. In the context of evaluating talent, for example, should teams look at the numbers or listen to the scouts? But that isn’t quite right, either, because there is a long, entrenched history of listening to the scouts, so putting too much stock in the college on base percentage is anathema to the whole process.  The scouts don’t believe the numbers, and management trusts the scouts.  So the conventional wisdom is that the numbers lie.

It doesn’t end there, either.  The type of quantitative analysis used for player evaluation has been extended to on-the-field strategy, again exposing a tension between what the numbers guys say and what various experts (i.e., managers, sportswriters, fans) think. (For a similar example in the context of American football, see here).

For our purposes, one of the interesting questions is why didn’t anyone try to innovate via these quantitative techniques sooner? Bill James has certainly been around for as long as I can remember, and James, in effect, invented modes of analysis to help organizations improve their decision making.  I somehow doubt that a schoolboy like me knew about this guy and baseball general managers didn’t.*  The main storyline of Moneyball is that it took Billy Beane to come along and actually do something with it.  Beane was the innovator  and implementing James’ ideas helped the A’s to overperform relative to what their budget suggested.

So why didn’t it happen sooner? Is there something about organizational architecture that prevents these teams (firms) from changing the way they do business? Is failing using unconventional methods worse than failing through business as usual? Does ridicule of fans and sportswriters discourage management from taking changes? If so, why was Beane able to implement these decision criteria? Is it because the A’s couldn’t get any worse so the ownership finally threw up its hands and said uncle?

The salient characteristic of markets is that good ideas are copied quickly. Once Beane had tilled the soil, Theo Epstein of the Red Sox, purportedly is a disciple of James, leaned on these techniques heavily in his quest to knock off the Yankees.  And, if it can work for the Red Sox, it can work for anybody.

So did other teams try it and did it work?

Economists Jahn Hakes and Raymond “Skip” Sauer investigate the validity of this storyline in an econometric assessment of the Moneyball hypothesis. They find support for the hypothesis that there were “inefficiencies” in player markets that Beane was able to exploit, and that Beane’s successes were indeed emulated.  Here’s from their paper:

[H]itters’ salaries during this period did not accurately reflect the contribution of various batting skills to winning games. This inefficiency was sufficiently large that knowledge of its existence, and the ability to exploit it, enabled the Oakland Athletics to gain a substantial advantage over their competition. Further, we find that even while various baseball interests denounced Beane and Lewis as charlatans in a stream of media reports, market adjustments were in motion (for discussion, see Lewis, 2004; Craggs, 2005). These adjustments took place around the time Lewis’s book was published, and with sufficient force that baseball’s labor market no longer exhibits the Moneyball anomaly.

The paper speaks to the question of evaluating player talent, but does not explore the questions about on-field management decisions.

As we attempt to digest that, we might move on to how this translates to the types of questions Menand is asking?  Certainly, the academy has tremendous heterogeneity of organizations, ranging from the Ivy leagues and elite private universities on down to the University of Phoenix (does that count?), with a wide range in between.  Leaning on Moneyball, we might ask are there some sort of inefficiencies out there that we might be able to capitalize on? How would we identify those? Is is possible to implement such plans given that our peer institutions are not doing it and we might look foolish to them, to our prospective students, and to our alumni donors? 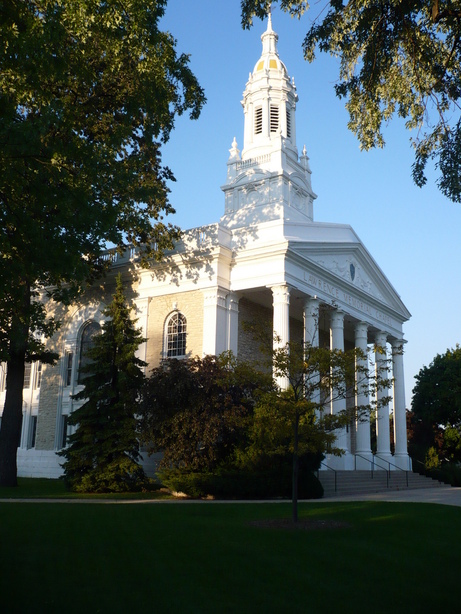 My initial thoughts on this is that colleges are far more constrained than baseball management in implementing innovative ideas.  First, the baseball ownership has far more autonomy in decision making. Second, the performance of baseball teams is far more transparent, which likely makes their financial well being more volatile.  If a small liberal arts college with a national reputation shirks on quality, I suspect it would take much longer for that information to become available to potential students, current students, and alumni than if a baseball team does.

There are certainly some liberal arts colleges that have substantial differentiation.  Along with Oberlin, we have the Conservatory of Music.  Cornell College and Colorado College offer courses in “blocks” rather than the semester model.  Reed College offers an excessive work load and minimizes the emphasis on course grades.  These ideas generally have not been widely emulated.

In contrast, many liberal arts colleges now offer business majors. As we learned in McCraw, one of the major changes in the academy since Schumpter’s time is the expansion of business education.  Indeed, Menand points out that more than 20% of all degrees are conferred in business.  But, even given the robust demand for business education, many schools have eschewed business curricular offerings. The reasons for this are not necessarily simple, but certainly a central one is the tension between liberal education and professionalism (Menand considers this to be a false dichotomy, and we can explore this further).  In addition to the professionalism, I suspect another source of tension certainly is that people suited to teach business courses may well not be trained through the conventional doctoral research channels.

Given this backdrop, I would like to note some trends in business education at elite liberal arts colleges (taken from Lemke et al.)  As of 2003-04, about half of the top 100 liberal arts schools offered a business degree. If you divide those schools according to conventional ranking metrics, a clear pattern emerges.  Of the top third, only about 10% offered a business degree, whereas in the lower third over 90% did.  In the middle third, including Lawrence, it was split about equally between schools that offered a degree and schools that didn’t. I don’t need much of a model to predict that schools outside of the top 100 overwhelmingly provide business offerings.

These are a few things to chew on, mostly related to my own reading.  I will look forward to discussing this further.

*Of course, James was also an innovator, as he provided tremendous value added to both his own interest and to fans who followed him.  Even before Moneyball, James was iconic and had spawned statistical analysis of baseball known as Sabermetrics.