As far as I know, the climate is still changing, so nothing to update there.  According to economists Matthew Kahn and Matthew Kotchen, however, we don’t seem to care as much about it (if “googling” is a good proxy for “caring”, that is).  Ed Glaeser discusses this and some more of Kahn’s research in today’s NYT Economix blog post.  One of the provocative points is the claim that climate change is a done deal, and that the big coming challenge is to adapt.

One person swimming against the apathy tide is the self-proclaimed skeptical environmentalist, Bjørn Lomborg.  For years, Lomborg has been publishing pieces questioning the scale and scope of environmental problems.  He has now reversed course and is calling for massive investments to tackle the problem.  From my quick read, the tackling seems to be on the emissions side, as opposed to adaptation.

Anyone who has sat through my carbon capture and sequestration talk certainly knows I’m with the adaptation folks on this one.  I simply am not convinced that the world can cut emissions enough to stabilize atmospheric concentrations, even under the most wildly-optimistic scenarios.

For a bit more meat on the climate change discussion, check out a recent symposium in the Journal of Economic Perspectives.  Here’s a table of estimated net benefits across 13 studies. 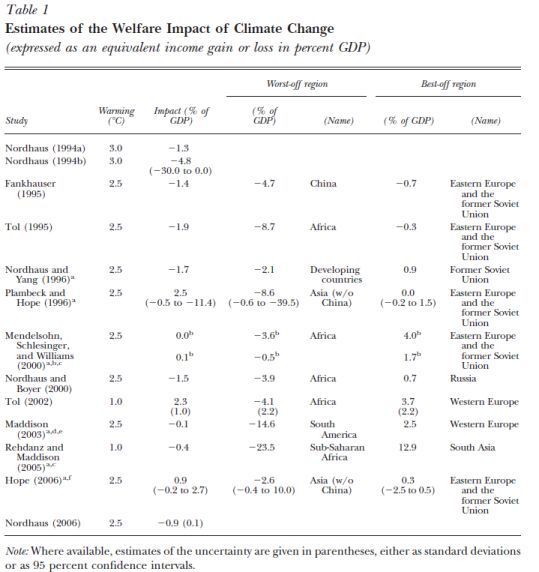 Notice the overall impacts in terms of GDP per year seem to be on the order of -1% per year, though the estimate from the review author’s article (Richard Tol) shows net gains.  You might also take note as to which countries are likely to win and lose in these estimates, and take that into account next time countries sit down to hammer out an agreement.

Should be an interesting century.