The True Costs of Electricity

In Econ 100 this week we talked about external costs (and benefits) and the equivalence of carrots (prices) and quantities (sticks) in terms of the possible “optimal” equilibrium outcomes.  The elephant in the room in these types of discussions is the measurement of the so-called external costs.  As if on cue,  environmental economics superstar and sometime Presidential advisor Michael Greenstone and his co-author Michael Looney have upped a paper with their estimates of these costs associated with electricity and energy. 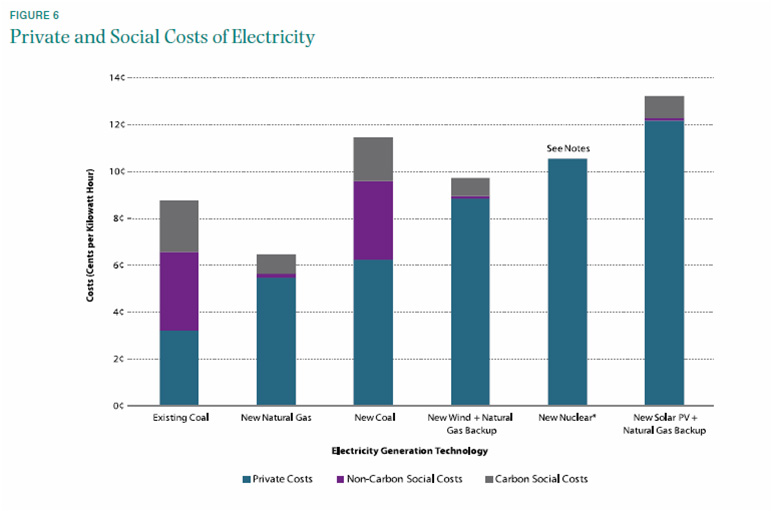 The glaring purple associated with coal shows that the principal external costs are not from greenhouse gases, but from conventional criteria pollutants (e.g., NOx, PM). The external costs of coal, even new “clean coal,” are estimated to be higher than the actual operating costs.  Yikes.

It’s worth noting that both solar and wind have non-trivial carbon footprints, because the variability of supply requires ample natural gas plants to cover supply on days when the wind doesn’t blow and the sun doesn’t shine.  Certainly, developing battery storage technologies may well turn out to be the biggest environmental challenge of this next half century.

The results are probably worth quoting at length (after the break):

Our primary sources of energy impose significant health costs on our citizens — particularly among infants and the elderly, our most vulnerable. For instance, even though many air pollutants are regulated under the Clean Air Act, fine particle pollution, or “soot,” is estimated to still contribute to roughly one out of every twenty premature deaths in the United States (EPA 2010b). Indeed, soot from coal power plants alone is estimated to cause thousands of premature deaths and hundreds of thousands of cases of illness each year….

The social costs associated with using carbon-intensive fuels also include climate change. If carbon dioxide (CO2) emissions continue to rise at the current rate, they are likely to drive temperature changes that have significant environmental and health consequences: rising sea levels, storms that are more frequent and more severe, increased flooding and drought, and other dramatic changes in weather patterns. These changes in turn could result in an increase in water- and insect-borne diseases as well as in the loss of biodiversity and, due to floods or droughts, the loss of human lives and livelihoods….

Finally, there are other economic, political, and national security risks associated with current domestic energy policies. Oil still plays an important role in the American economy: it powers most of our transportation sector and is an important input in many industries. Continuing turmoil in the Middle East has raised the profile of energy security and the geopolitical implications of reliance on oil. In part to protect major oil supplies, the United States has maintained a military presence in the Middle East for more than 50 years. On several occasions, it has become mired in military interventions in part to prevent oil supply disruptions, among other objectives.