“You could walk out rich. Rich!”

Jordan Weissmann at Slate has a fabulous opening in his most recent post:

Want to guarantee yourself a steady, well-paid career? Major in engineering. Want to take a shot at striking it rich? Then major in economics.

Now, I realize that money isn’t everything, it can’t buy you love, etc, etc… but the idea that economics majors are disproportionately represented at the top of the income distribution is too tempting to pass by.  Weissmann draws this conclusion after looking at a Hamilton Project report and an accompanying interactive tool that probes the distribution rather than the average earnings of various college majors (as well as comparing a college degree to various other levels of education).  As one might expect, the college degree is still a premium, and you can bank on quantitative skills:

Majors that emphasize quantitative skills tend to have graduates with the highest lifetime earnings. The highest-earning majors are those in engineering fields, computer science, operations and logistics, physics, economics, and finance.

That takes care of average earnings.   But the Hamilton Project does something clever and plots the distribution of lifetime earnings by major.  Here, Weissmann shows the lifetime present discounted value of earnings for a selection of popular majors — engineering, English, business administration.   Note that the median (50th percentile) engineering major earns more than the other majors, but as you move to the upper-end of the distribution, economics majors make considerably more money:

Economists surpass engineers at about the 60th percentile and the highest-paid econ grads can expect to make $3 million more (in NPV terms) than the highest-paid engineering grads.  Notice that economics and business management are not close substitutes at all in the figure, as the management grads don’t fare nearly as well at any point in the distribution, and certainly not at the  top. That observation is possibly consistent with some evidence on who becomes a CEO.

The lifetime earnings calculation is not a straight number, but a present value calculation at a 3% discount rate.  To provide a wee bit of perspective, an individual that graduated college into a $50,000 per year job and got a 3% raise every year would retire at age 65 with an income of approximately $175,000.  The NPV of that individual’s lifetime earnings would be just north of $2 million, which is right about the median lifetime earnings of a typical engineering and econ graduate. Not bad, but not exactly the 1%, either.

The interactive tool is pretty cool.  I changed the majors to include computer science, mathematics, and art history.  Predictably, the art history majors lag behind the other disciplines, but it is interesting to note that the top-earning, say, 10% of art history graduates have lifetime earnings higher than about 70% of the economics graduates. 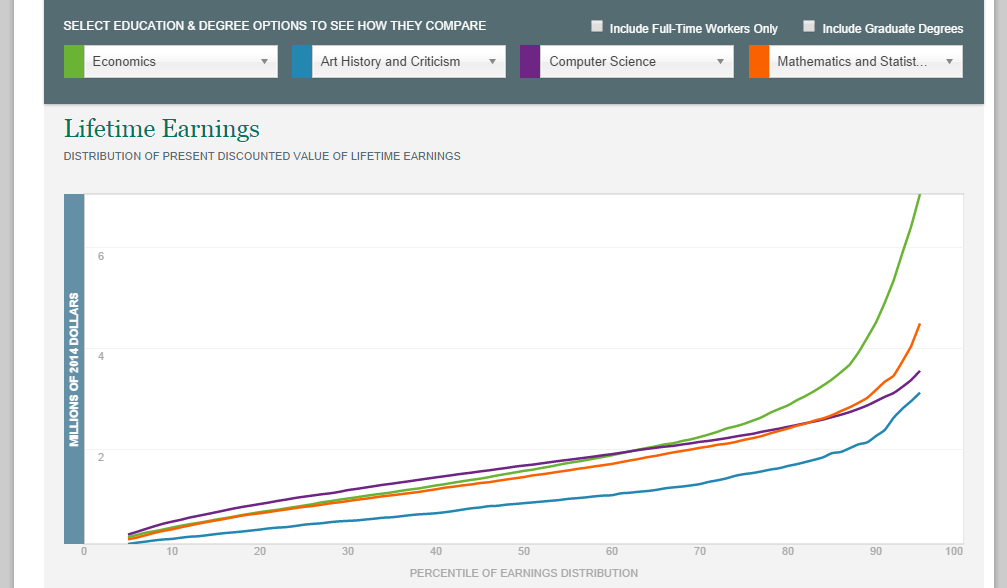 The thread title, of course, is a quote from Ben Loman.