I was recently chatting with some alumni who shocked me by saying they regularly hit the Lawrence Econ blog for…  Well, I forgot to ask why they came to the blog, but presumably for posts like this.

Today’s question: how can we quantitatively assess the impact of a big event?

The answer, sometimes, is to set up an event study!   Craig MacKinlay has a nice overview in the Journal of Economic Literature  (cited more than 3000 times!) where he shows how to evaluate the impact of an event on the value of a firm (or firms). The basic idea is that if the event is unanticipated, you can look at the value of the firm before and after the event, and see how “the market” assessed the event’s impact.

Leah Libresco at the FiveThirtyEight website recently took a look at how the recent Supreme Court decision on the Patient Protection and Affordable Care Act (PPACA) (a.k.a. “Obamacare”) affected the value of big insurance companies.   The picture is after the bump:

As you can see, the news that the Supreme Court upheld the validity of the law caused a surge in insurance company stock (the stock price times the number of shares gives the “value of the firm”), suggesting that the PPACA is profitable public policy for insurance providers.  Does this surprise you?  I am certain you can get an explanation from Professor Finkler if you see him in the hall.

As far as events go, the Supreme Court decision was not truly exogenous, meaning that we knew it was coming.  As Libresco correctly points out, that jump in stock prices likely understates the impact of the decision, because available information suggested that the decision was in the cards:

According to FantasySCOTUS, a prediction market that has been fairly successful at forecasting the outcome of Supreme Court decisions, the government was favored to prevail in its case. Assuming investors were similarly optimistic about the government’s chances, the pre-decision stock prices likely reflected the predicted outcome, meaning the bounce started from higher up than it might have otherwise.

The evidence suggests that the PPACA in its current form is profitable for insurance industry, at least for the big players.

In terms of an exogenous, unanticipated event  I often use the Deepwater Horizon oil spill‘s effect on British Petroleum (via EconBrowser).  The figure shows the BP share price in the days leading up to and immediately following the blowout.  The challenge of the event study is to figure out what the price would have been absent any exogenous shock, represented by the red line. 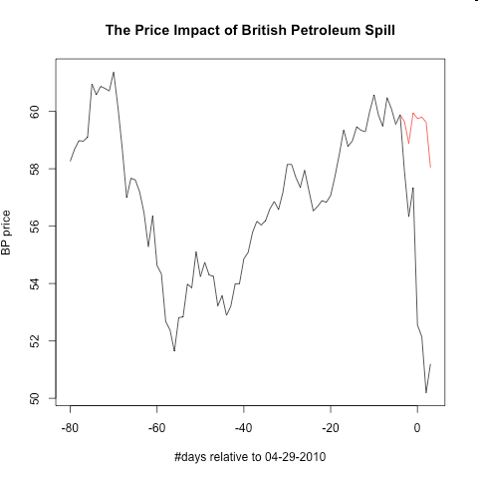 The picture here is clear — the spill led to a substantial drop in the value of British Petroleum controlling for other factors (e.g., other oil company stocks, the change in the overall market). Overall, the stock price dropped about $7 per share following the spill compared to the estimated counterfactual price.  With three billion shares, BP took about a $20 billion hit to its company value the week following the spill.  Remarkably, the $20 billion figure is in the ballpark of what BP wound up paying out in damage settlements (!!!).

If this type of work interests you, I suggest you pick up the MacKinlay piece and go from there.

It’s like a Senior Experience project waiting to happen.