The founder and big pickle behind the Jimmy John’s enterprise is threatening to take his fixins and go elsewhere, this according to the Champaign News-Gazette. Mr. Jimmy John (Jimmy John Liautaud) is upset about the steep tax hikes enacted this past week by the Illinois state legislature — raising the personal income tax from 3 to 5 percent (67% increase) and corporate taxes from 7.3 to 9.5 percent (30% increase).

“My family and I are out of here.”

This story has some personal interest to me, as I was in Champaign when he opened up one of his first shops back in the late 1980s.  I still recall one of my (more obnoxious) friends — impressed by the deliciousness of the Jimmy John’s sandwich — on the phone trying to bribe providing cash incentives for the workers to bring him an order outside of their regular delivery area.  Not too many years later, Jimmy John’s has gone from a couple of sandwich shops in east central Illinois to a big corporate supporter of everything from NASCAR to University of Illinois athletics.

Friend, that’s a lot of sandwiches.

If he indeed packs up corporate shop and heads elsewhere, it will certainly impact the local economy in some fashion.

Some people may not realize how many travel to Champaign-Urbana as a result of Jimmy John’s being here – many of them for training.

“They eat at Cheddars,” get automotive service at Sullivan-Parkhill and “drink at Carlos (Nieto’s) bars.”

Jimmy John’s offices occupy 23,000 square feet on Fox Drive, and Liautaud said he had considered buying a 20,000-square-foot building just north of those offices. Those plans went out the window with the tax increase, he said.

As far as the national economy goes, it probably doesn’t matter where Jimmy John sets up shop, if Champaign doesn’t enjoy the benefits, someone else will.  But, I wonder what sort of elasticity the legislative analysis used to estimate business leaving the state when they put these tax increases together? 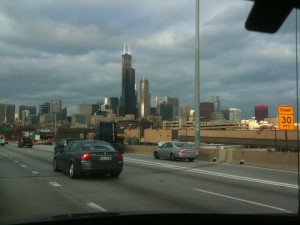