You Shan’t Know Our Velocity

Robert Higgs has a very readable post about the demand for holding cash these days.  To wit, the Fed has been pumping massive amounts of liquidity into the system over the past four years, and what has the public been doing with it?

Exhibit A, this extraordinary graph from our pal, FRED, shows the run up in bank reserve balances from roughly $0 in 2009 to about $1.5 trillion today.  In other words, that’s cash on hand, ready to lend, reserve balances, come and get it.

Higgs points out that this would normally be inflationary, potentially seriously inflationary, but that hasn’t happened because loans aren’t going out and the velocity of money seems to have tanked.

What is the velocity of money?, you ask.

Well, if you have to ask, it is the ratio of nominal GDP to the money supply.  That didn’t help?  Then try here (or if you aren’t from a campus URL, here).

So, that leaves us with the question, why are people holding so much money?

Tough to say.  But here’s some food for thought:

One of the things I assume you learn in macro is that money creation only works if the financial system makes loans, otherwise, not going to happen. Higgs is the champion of the “regime uncertainty” idea, and while I have no pony in this race, I have no better explanation. 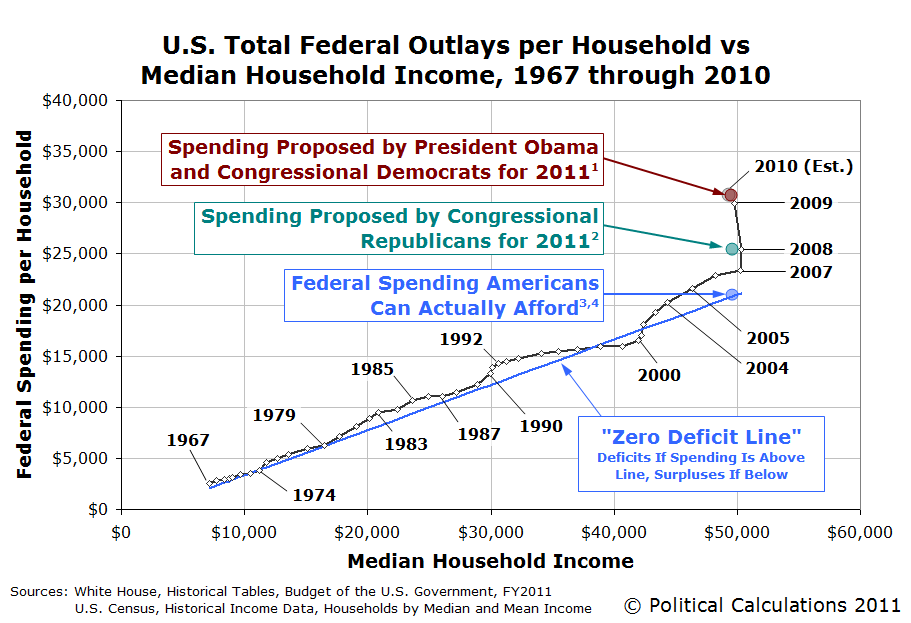 Costs of the Administrative State

If you’ve ever scratched your head and wondered where I get all of that data on regulatory budgets and staffing, scratch no more — the new A Decade of Growth in the Regulators’ Budget: An Analysis of the U.S. Budget for Fiscal Years 2010 and 2011 is here!

Brought to us by former OIRA head, Susan Dudley, the brief combs the U.S. budget for all the summary statistics on agency appropriations and staffing.  (For those of you who can’t see the axes here, along the X axis is years, beginning in 1960 and ticked off in five-year increments.  Up the Y axis is billions of 2005$ in $10 billion increments). 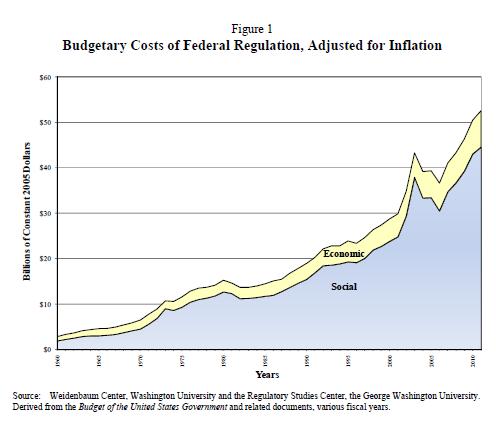 A page turner, I know.  The brief reveals that outlays and staffing are at their all-time highs, which does not surprise me.  I do, however, marvel at the growth of Homeland Security.  In real terms (2005$), the Homeland Security budget has gone from $8.8 billion in 2000 to more than $20 billion today, accounting for more than 40% of U.S. regulatory spending and more than half the personnel as well.  Mind boggling.

As I hope will become a tradition here, feel free to play the “my favorite part of the regulatory budget report” game.  The winner will receive at least one sticker.