On October 26th, 1911, President William Howard Taft became the first sitting president to visit the Fox Cities area, addressing a crowd from the steps of Main Hall. His stop in Appleton was part of a nation-wide speaking tour through which he hoped to pressure the Senate to ratify his peace treaties with France and England. The Lawrentian reported: 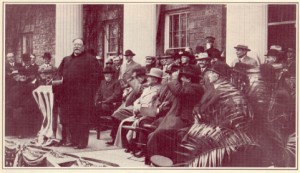 “After driving about the city on the route previously mapped out, the presidential party arrived at the south door of Main hall, having come across the Lawrence street bridge and along the driveway in front of Ormsby and Science halls.

A unique welcome was given President Taft as he entered the main building. The co-eds of the senior class, all dressed in white and each wearing a white jersey sweater, were lined up on either side of the hallway, connected with a streamer of red, white, and blue, and as the executive entered the south door he was presented with a bunch of roses in behalf of the college by Miss Florence Plantz. The President was pleased as well as surprised and thanked the girls for their remembrance.

When Mr. Taft emerged from the big front door of Main hall he was greeted with yells by the Lawrence students and lifted hats. He removed his high silk hat and bowed and smiled, then seated himself in the big chair back of a flag-draped pedestal on the porch. The seats for those provided with invitations were ranged on either side and a little back of the president’s chair. The faculty and college students had previously assembled directly in front of the extended platform, the faculty and senior boys appearing in caps and gowns.”

After introductory remarks by Appleton’s mayor, and then by Lawrence President Samuel Plantz, President Taft addressed the crowd (which The Lawrentian reported to be 10,000 strong.) Among his words:

“We are a great nation, afraid of no other nation, and not subject to the charge of cowardice. We have no entangling alliance…The poor people of Great Britain and France and other countries look to us to lead in the movement for peace among the nations. And I look to you, especially to your younger people, to feel a sense of responsibility not only towards our own country but, with your power and intelligence and opportunities, a sense of duty which will impel you to help advance the highest ideals of Christian civilization throughout the world.”

Though this was surely a momentous occasion, it may be worth noting that The Lawrentian report on this event shared equal headline size with a football game re-cap and an account of Y.W.C.A. activities.