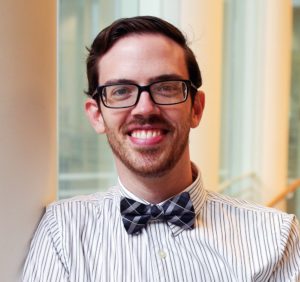 Editor’s note: We invited Lawrence alumni who have gone into library work to share with us what they do and how they got there.  Just in time for reunion, here’s another in a series.

Libraries and librarian interests, responsibilities, and compulsions have been present throughout my life, from the weekends I’d volunteer for the Friends of the Library booksale in my hometown to the Borders Books job I held following my time at Lawrence. It was during that formative interim at LU, however, where I learned firsthand what an academic library is all about.

The first time I set foot in the Mudd was during freshman orientation. There was a tour being offered and, unbeknownst to me, the handful of first years who actually attended the tour were entered into a drawing for a prize. I remember how surprised I was to have won a gift certificate to Lombardi’s Steakhouse—the first (and one of the few) times I’ve won anything substantial in a drawing! The real prize, though, turned out to have been the work-study position at the Mudd I secured shortly thereafter and which would last four years, expose me to all manner of library operations responsibilities, and introduce me to a lot of great coworkers.

While my job at the Mudd was stable and abiding throughout my LU career, my academic pursuits were all over the map. I entered LU having done well in an AP Biology course, but decided to explore other disciplines (e.g. philosophy, history, anthropology, etc.) that I’d otherwise had little or no exposure to in high school. The mad dash in my junior and senior years to pull-off a biology major didn’t quite work out, so I switched to a “natural science interdisciplinary” major—a decision I’d happily make again. With the rich variety of science courses I ended up taking, I was able to sample from a fuller menu of academic disciplines while still ultimately getting accepted into a graduate program in biology.

Another work-study position I held—this one during grad school at Case Western Reserve University—was one that required me to organize and manage medical records, microscope slides, and patients’ tissue biopsies for a dermatopathology lab at a university-affiliated hospital. It was only when looking back on the commonalities of these library and librarian-like experiences I’d had, in addition to my penchant for “academic tourism,” that, after completing an MS and working for three years in a molecular biology lab, I decided to switch things up and enter the academic library world.

I couldn’t have done this alone, and I thankfully didn’t have to. Friends and fellow Lawrence alumni Steve and Emily Flynn stayed in contact with me throughout their time at the University of Michigan’s School of Information and beyond, providing me with much guidance during my transition. In the spring of 2014—and with the help and advice of the Flynns and other Lawrentian librarians—I was accepted into UW–Madison’s School of Library and Information Studies.

Fast-forward almost three years, and, while I’m still working on my library degree, I’ve had the tremendously good fortune to hold a full-time librarian position at my (other) alma mater, Case Western, where I’m a Research Services Librarian at the university’s Kelvin Smith Library (also since 2014). In this position, I support the Department of Biology, along with two other science departments and the Institute for the Science of Origins. My responsibilities range from academic subject liaising and collection management to reference and classroom instruction.

Learning the ropes of the academic library profession on the job while simultaneously taking courses in library science has been very illuminating. It also has its perks: when you’re a student, you get opportunities to apply for scholarships and student pricing on most professional development offerings, so conferences, workshops, and memberships are more affordable during this period than they’ll ever be. To any LU students who are planning on entering the library profession: take advantage of these! Even if you’re not working while you’re in school, you’ll still set the foundation of your library career through the networking and volunteering you’ll do. The people you meet meet may be your future bosses, coworkers, friends… or even significant others! (It’s true—I met my librarian-fiancée at the very first library conference I attended!)

As I write this, I’m a week out from attending my 10-year LU reunion. And after those ten years since leaving LU, I’d say I’ve finally found my calling—even if the message didn’t come across distinctly or coherently sooner. While I’d hesitate to discourage any Lawrentians from following their own path of self-discovery after graduating, I would urge them, if they’re even remotely inclined to the profession, to at least consider a future in librarianship. For those who have found themselves similarly drawn to libraries, learning, and helping others learn, the profession has a great deal to offer you.