Swan, choral director of Cantala, Lawrence’s all-women’s choir, will have the honor of showcasing the talented voices of his gifted student choir twice at the 2011 American Choral Directors Association (ACDA) national conference March 9-12 in Chicago.

Conducted every two years, the ACDA national conference is the largest and most important choral event conducted in the United States. It typically attracts in excess of 5,000 choral directors from around the world. 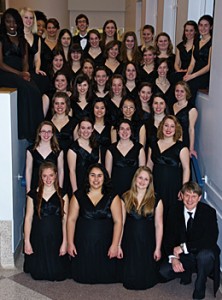 The 36-member Cantala is the only collegiate women’s choir in the country selected to perform at this year’s conference and one of only 42 choirs from around the world invited to sing.

“Obviously this is a huge honor,” said Swan, associate professor of music, who has directed Cantala the past nine years. “It’s a little like winning a choral music Oscar in that you’re selected by a panel of your peers who have chosen to showcase Cantala as an example of one of the best choirs in the country. That’s very gratifying.”

Cantala was selected from among nearly 500 submitted tapes in a blind audition process by a jury of choral conductors.   Choirs were chosen based on a series of recordings of performances covering the past three years.

“In making their selections, the jury wants to make sure any choirs they chose are consistent and reliable over a span of time.  You can’t just have one good year,” said Swan.

Featured twice on the conference’s last day, Cantala will sing a 22-minute program on Saturday, March 12: a morning performance at the 3,500-seat Auditorium Theater on the campus of Roosevelt University and an afternoon performance at historic Orchestra Hall at Symphony Center, home of the famed Chicago Symphony Orchestra.

This is the second straight ACDA national conference in which a Lawrence choir was invited to perform.  The Lawrence Concert Choir, under the direction of Rick Bjella, was selected to sing at the 2009 conference in Oklahoma City.

“To be chosen to sing at two national conventions in a row is really significant,” said Swan. “It clearly speaks to the quality of the choral music-making program at Lawrence.”

Active in the Appleton community, he serves as choir director at Appleton Alliance Church and conductor for the adult community choir, the White Heron Chorale.