Lawrence University has been named one of the country’s best values among private colleges by Kiplinger’s Personal Finance in its 2014 annual list of the top 100 private universities and top 100 liberal arts colleges from among the nation’s more than 2,100 four-year, not-for-profit, public and private colleges. 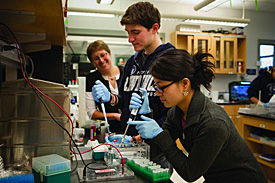 Lawrence, ranked 96th, and the other schools selected for the 2014 list, represent the colleges that provide high-quality academics at a reasonable cost. Kiplinger’s draws its list from colleges that exemplify the attributes parents and students look for in higher education, including small class sizes, a good freshman retention rate and a high four-year graduation rate.

“It may seem counterintuitive to have so many private colleges—which generally look quite expensive—listed as ‘values,’” said Ken Anselment, Lawrence’s dean of admissions and financial aid, “but Kiplinger’s has hit the right notes in their assessment by shining a light on the return on the investment. It’s a subtle, but important shift in perspective.”

In compiling its rankings, Kiplinger’s measure academic quality and affordability. Academic criteria include the student admission rate, the test scores of incoming freshmen, student-faculty ratio, and the four- and five-year graduation rates. On the cost side, Kiplinger’s measures the sticker price, the availability and average amount of need-based and merit-based financial aid, and the average student debt at graduation.