Jobs (slightly up) and the Unemployment Rate (downward trend) 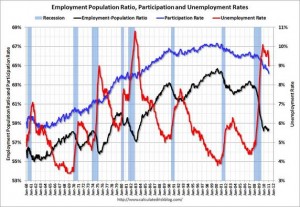