Trends in the Distribution of U.S. Household Income

The “official scorekeeper” for Congress, the Congressional Budget Office, has just released a report on how the distribution of household income has changed from 1979 (when coincidentally I came to Lawrence) to 2007.  Their bottom line result is displayed in the figure below.  The “CBO estimates that the dispersion of market income grew by about one-quarter between 1979 and 2007, while the dispersion of after-tax (and governmental transfers) income grew by about one third.”  In particular, the share of after-tax, after transfer household income that accrued to those with the highest 1% of income grew from 8% in 1979 to 17% in 2007.  One should be a bit cautious about these comparisons since the there is a lot of movement in and out of different income brackets.  In short, it’s unlikely that most of the households counted in the 1979 calculation are in the 2007 calculation.  I encourage you to read the summary or the full report. 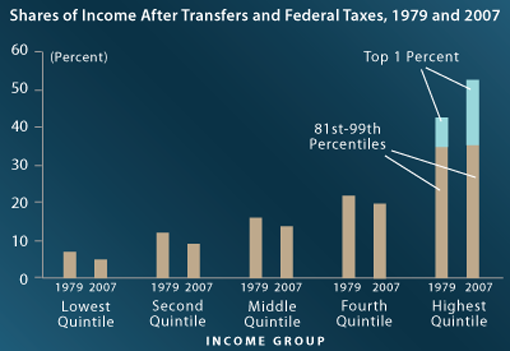