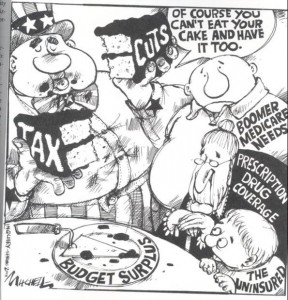 Politicians pontificate profusely about their prodigious plans for procuring Federal budget sanity.  For the most part, their potential policy projectiles miss the mark.  In an essay in today’s Wall Street Journal entitled “Everything You Ever Wanted to Know About the Budget** But Were Afraid to Ask,”  David Wessel highlights six key facts that will constrain the efforts of these pugilistic pundits.

1. “Nearly two-thirds of annual federal spending goes out the door without any vote by Congress.”

3. “About $1 of every $4 the federal government spends goes to health care today. That is rising inexorably.”

4. “Firing every federal government employee wouldn’t save enough to cut the deficit in half.”

5. “The share of income most American families pay in federal taxes has been falling for more than 30 years.”

6. “The federal government borrowed 36 cents of every dollar it spent last year, but had no trouble raising the money.”

These “facts” form the basis for Wessel’s new book to be published next week and should inform political debate.  I won’t hold my breath regarding the latter point.  The cartoon reflects an earlier time period, but the political dynamics today, as characterized in the cartoon, still obtain.