Huma Hakimzada is confident she can handle anything Lawrence University throws at her having already survived fleeing her native Afghanistan to escape the fundamentalist rule of the Taliban.

The 24-year-old from Monterey, Calif., isn’t your typical Lawrence freshman, but Hakimzada is just as excited as any of her classmates to begin her Lawrence career.

“I’ve done a lot of different things in my life, but nothing gave me the comfort of getting that phone call offering me admission,” said Hakimzada, who has worked as a personal banker for Wells Fargo the past three years while taking some night classes at a community college. “A whole new book opened for me with that call. I can’t wait to fill in the pages of that book with the new adventures Lawrence promises for me.”

Peter Thurlow will arrive on campus from Madison with a penchant for recreating ancient objects. The gastraphetes he constructed — a type of ancient Greek crossbow — won first prize at the 2010 Junior Classical League National Convention’s models competition, while the wax writing tablets he made earned second-place honors at this year’s competition. 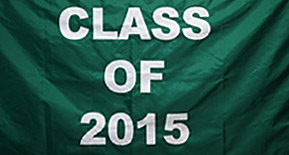 Hakimzada, the first female Afghan student to attend Lawrence, is following in the footsteps of her older brother, Zubair, who graduated from Lawrence in 2006 and now works for the U.S. Department of Defense.

When the Sunni Muslim Taliban seized power in Afghanistan in 1996, Hakimzada and her family hastily fled their hometown of Kabul and relocated in Islamabad, Pakistan. After five years of seeking refugee status, the family’s application was finally approved on Sept. 9, 2001. Two days later, terrorists struck America, changing everything. It would take another 13 months before the family finally would reach the United States, eventually settling in California.

The daughter of two former college professors in Kabul, both of whom now teach Dari, a native Afghan language, at the Defense Language Institute in Monterey, Hakimzada says school was her favorite outlet.

“Life took me on a different route for a long time, but going to school was always my priority. When the opportunity arose, I didn’t want to wait another second. Zubair doesn’t love any place half as much as he loves Lawrence, so he obviously was an influence on my decision. I always wanted to go to the same school as Zubair, so Lawrence was an easy choice.”

Thurlow’s list of creations include a working hydraulus, considered the world’s first keyboard instrument and a forerunner of the modern church organ, that used water power to move air rather than a bellows. He constructed his version based on drawings and pictures of Roman and Greek mosaics. He also has built a Greek lyre.

“I enjoy figuring out how an ancient weapon or instrument would work,” said Thurlow, who is considering a major in art history or history. “A deep part of me likes to preserve cultural and historic items and actually build reproductions.  That’s a really good way of showing what these items were and preserving the knowledge of them.”

A school record 2,667 students applied for admission to Lawrence in 2011, surpassing the previous high-water mark of 2,625 established last year.  But because of an unexpectedly large freshman class in 2010, Lawrence needed to be even more selective than usual to meet its target goal of 330 freshmen.  Only 52 percent of this year’s applicants were offered admission, the lowest figure in recent history

“Last year’s class of 452 freshmen — 100 more than we expected — was unprecedented in its size,” said Ken Anselment, dean of admissions and financial aid. “That had a ripple effect this year. To ensure the best academic and residential experience for our students, we need to limit our overall enrollment, which meant admitting far fewer freshmen this year.
“And despite popular belief, admissions folks don’t always take pleasure from saying no to really good students,” he added. “Ours don’t.”

• 13 freshmen were valedictorians of their graduating class

• Average ACT score 29 (among those submitting scores; Lawrence is a test-optional institution)

• 31 percent graduated in the top five percent of their class

“Although numbers may be an easy way to assess the ‘quality’ of a class,” Anselment said, “it’s the stuff beyond the numbers that’s more important. What matters most to us is who these students are as people with unique talents, interests, perspectives and experiences. That’s what really gets us going here.”

While members of the freshmen class hail from 26 states and 21 countries, nearby Neenah High School accounted for the most freshmen (6), while Appleton North and Deerfield (Ill.) high schools were second with four students each.

Founded in 1847, Lawrence University uniquely integrates a college of liberal arts and sciences with a world-class conservatory of music, both devoted exclusively to undergraduate education. Ranked among America’s best colleges, it was selected for inclusion in the book “Colleges That Change Lives: 40 Schools That Will Change the Way You Think About College.” Individualized learning, the development of multiple interests and community engagement are central to the Lawrence experience. Lawrence draws its 1,520 students from 44 states and 56 countries.