Lawrence was ranked 56th nationally — up from 60th last year — among 239 national liberal arts colleges and universities.  Lawrence was the highest ranked college among eight Wisconsin institutions in the category.  Lawrence also was Wisconsin’s top-ranked college by Forbes in its college guide released last month.

U.S. News’ annual rankings are based on a combination of subjective information such as academic reputation (22.5%) and quantitative measures that education experts have proposed as reliable indicators of academic quality, including graduation and retention rates (20%), faculty resources (20%) student selectivity (15%) and alumni giving rates (5%), among others. 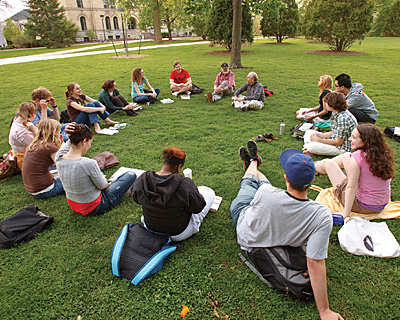 Lawrence showed improvement in several of the categories used in the ranking methodology including number of incoming students ranked in the top 10 percent of their high school class (46%), freshman retention rate (89%), graduation rate (77%), and acceptance rate (53%). Lawrence’s commitment to individualized learning and small classes was reflected in its high rate of classes with 20 students or fewer (75%), one of only 30 schools among the 239 in the category with that high of a percentage.

“It’s nice to be recognized by this ranking, especially for our individualized learning,” said Ken Anselment, dean of admissions and financial aid at Lawrence. “It would be even nicer if the magazine counted all of the one-on-one courses we do at Lawrence, of which there are many. It’s an essential point of distinction for us, but unfortunately, U.S. News only counts classes with enrollments of at least two.”

While the national recognition is appreciated, Anselment says families should consider all college guides as but one tool in their college selection process.

“College rankings value different things according to their own system. The best way to discover if a college matches with your values is to experience it yourself by engaging with it as much as possible before deciding to enroll.

“Regardless of how each service assembles its rankings,” he added, “Lawrence will continue doing what it does best: providing a transformative learning experience that educates students as unique individuals.”

In compiling its 2013 “America’s Best Colleges” guide, U.S. News & World Report evaluated nearly 1,500 of the nation’s public and private four-year schools, using data from up to 16 separate factors, each of which is assigned a “weight” that reflects the magazine editor’s judgment as to how much that measure matters.  Each school’s composite weighted score is then compared to peer institutions to determine final rankings.

Institutions are divided into several distinct categories. In addition to the best liberal arts college category that measures national institutions like Lawrence, other rankings are based on universities that grant master and doctorate degrees and colleges that are considered “regional” institutions.