The irony is not lost on Addy Goldberg.

He joined elite company in the contest’s illustrious history by earning anointment as a trivia master as a freshman in 2011, a feat matched by few first-year students. After two more years as a master, he was thrust into the contest’s ultimate position as this year’s Grand Trivia Master.

“I feel like I’ve been raised by it, because my introduction to the contest wasn’t through playing it or through witnessing it, but through running it,” said Goldberg, who doesn’t have any freshman among his 12 trivia minions. “I feel a lot of debt to the trivia masters who ‘raised’ me as the freshman who had no idea what was going on, which usually is not how it’s supposed to go.

“Trivia in the general sense, the more bar trivia kind of thing, I’m actually very bad at,” Goldberg concedes. “I was actually in Quiz Bowl in high school and I was bad there, too. But I like weird stuff and I happen to learn a lot about it. I can’t exactly spout it off in a useful way sometimes but if you want to ask me what I’ve been up to on the Internet lately it’ll probably be obscure. So in a sense the trivia contest is pretty well catered to me.”

Q1. Who is the president of the micronation that fixed their currency to the cost of radishes in 2007? 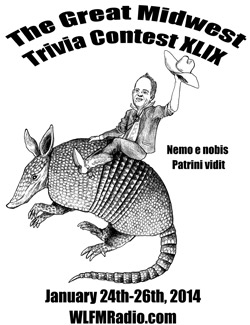 Under Goldberg’s direction, bragging rights to the title of this year’s 50-hour contest — last year’s battle royale of all things obscure drew 13 on-campus teams and 61 off-campus teams —kicks off anew at the precisely appropriately inconsequential time of 37 seconds after 10 p.m., Friday, Jan. 24 and runs continuously through midnight Sunday, Jan. 26. As it has since 2006, the contest will be webcast worldwide on the Internet at wlfmradio.com.

Launched in 1966 as an alternative activity for students who didn’t participate in an academic campus retreat, Lawrence’s Great Midwest Trivia Contest is a 50-hour celebration of all things insignificant, with 400 Google-challenged questions of various point values asked every three minutes, sandwiched around off-beat humor and eclectic music while teams scramble to call in answers to a phone bank in the WLFM studios.

Through its nearly half century existence, Lawrence’s trivia contest has enjoyed remarkable staying power, as Appleton in late January remains a destination point for many from around the country who return to the Fox Valley to reunite with friends and family for a weekend of fun and furious web surfing.

What’s the secret to the contest’s ongoing popularity?

“People seem to really care about it,” said Goldberg, a psychology major from Needham, Mass. “People are willing to work for it and put a lot of energy and effort into it, which is great, and there’s a lot of surprising energy there.”

Goldberg, whose doctor got excited during a recent office visit when he discovered he was examining this year’s Trivia Grand Master, also credits an intertwining of communities for the contest’s longevity.

“You get the tight-knit trivia masters who somehow manage to pull it together every year, and they are in debt to the players they see every day, their friends on campus, all of whom have a debt to the off-campus teams, the real lifeblood of the contest because they’re way more dedicated,” said Goldberg. “All the intertwining communities bring a lot of vitality to it.”

Q3. Zebulon Pike once floated all the way from Toronoto to Sackets Harbor, New York. What was he floating in?

Last year’s contest came to a clumsy conclusion when an on-campus team posted the answer to the final “Super Garradua” question on Facebook, prompting the trivia masters to cut short the time allotted to answer the 100-point question, preventing several teams, including the defending champions, from answering.

“I’ve been thinking about that, but as of yet there are no policy changes we’re going to announce,” said Goldberg. “It’s certainly going to be addressed, letting everyone know, ‘Let’s be serious, let’s watch ourselves.’”

This year’s contest will provide Lawrence President Mark Burstein with his trivia baptism. Following tradition, Burstein will have the honor of getting the 49th contest started by asking its first question, which, also by tradition, is always the final question — the Super Garruda — from the previous year’s contest.

Q4. What three words are written in metal letters on the back wall of Cranky Pat’s in Neenah?

What is usually an unanswerable question, last year’s Super Garruda proved to be anything but as seven on campus and 14 off campus teams managed to get the correct answer before the contest was called prematurely.

The controversial ending was prompted by this question: Within a sculpture by Mike Sullivan, the creator of “The Sex Life of Robots,” there is a building called “Kino Ironhole.” What is carved into the pavement to the left of the word “lulu?”

All teams worth their smart phone should start the contest with an easy 100 points by knowing it was “Big Unit Jizzbot.”