Charles Gibson, award-winning broadcast journalist and former anchor of ABC’s “World News” and co-anchor of “Good Morning, America,” will be recognized by Lawrence University with an honorary Doctor of Humane Letters degree June 15 at the college’s 164th commencement.

“Like Lawrence’s senior class, Charlie has thought deeply about the problems that face the world and about the ways a liberal arts education prepares one to find solutions,” said Lawrence President Mark Burstein. “I look forward to welcoming him to Appleton and to celebrating the many accomplishments of our largest class of graduates.”

Upon Gibson’s retirement in December, 2009, ABC News President David Westin said, “The first rough draft of history over this generation has been seen by an entire nation through the eyes of Charlie Gibson.”

His career is a road map dotted with reports of virtually every major news event spanning more than a quarter century and a veritable “who’s who” of newsmakers. In addition to interviewing seven sitting presidents, as “World News” anchor he moderated two presidential debates in 2008 and covered both the Republican and Democratic conventions.

Among his many important career reporting assignments:

• the 1995 Oklahoma City bombing of the Murrah Federal Building and the execution of convicted bomber Timothy McVeigh six years later.

• the tragic school shooting on the campus of Virginia Tech

• the resignation of President Nixon and the subsequent Watergate trials 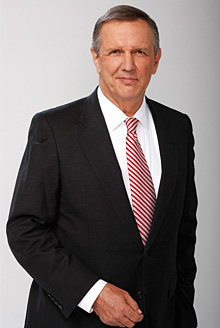 A native of Evanston, Ill., Gibson grew up in Washington, D.C. and earned a bachelor’s degree in 1965 from Princeton University, where be launched his journalism career as the news director for the university’s campus radio station.

Prior to joining ABC, Gibson worked for Television News Inc., a syndicated news service. He began his professional career as a Washington, D.C.-based producer for the RKO Network and later held reporter and anchor positions with several television stations in Virginia and Washington, D.C.

In addition to his Emmy Award in 2004, Gibson was recognized by the New York State Broadcasters Association with its 2010 Broadcaster of the Year award.  He received a National Journalism Fellowship in 1973 from the National Endowment for the Humanities and the 2006 Paul White Award from the Radio and Television News Directors of America. Quinnipiac University honored him with the Fred Friendly First Amendment Award in 2008.

A member of the Board of Trustees at Princeton, Gibson has previously delivered commencement speeches at New York’s Vassar (1989) and Union colleges and New Jersey’s Monmouth University. Union (2007) and Monmouth (2006) also have awarded Gibson honorary Doctor of Humane Letters degrees.