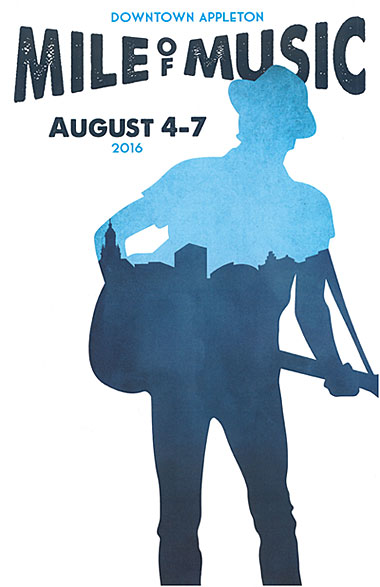 If you’re not already familiar with gumbooting or boomwhackers, Leila Ramagopal Pertl ’87 can’t wait to introduce you to them.

Pertl serves as the music education curator of Appleton’s four-day Mile of Music festival, a celebration of original music featuring more than 850 live performances by 240 artists from 28 states and four countries at 70 venues along College Avenue and the Fox River. The fourth iteration of the handcrafted artisan festival — Mile Four — runs Aug. 4-7.

Since its launch in 2013, music education has been a central and defining component of the festival. And Ramagopal Pertl, along with her husband, Brian Pertl ’86, dean of the Lawrence Conservatory of Music, have been at the forefront of those efforts, leading a team of 16 dedicated music educators, most of whom are Lawrence graduates or current students.

“Brian and Leila were two of the first people we met with about the Mile of Music concept,” said festival co-founder Dave Willems. “The Music Education Team has evolved through them into one of the highlights of the festival for attendees, artists and organizers alike. They immediately saw this as a neat community-campus collaboration and the enthusiasm of the entire education and interactive team has never wavered.”

Calling music “a birthright,” Ramagopal Pertl will oversee 59 hands-on education workshops and hands-on performance opportunities over the course of the festival for music lovers of all ages. Everything from ukulele and Didjeridu to Irish dance and Balinese Gamelan will be represented.

For the uninitiated, gumbooting, a powerful, percussive dance developed in South African mines during apartheid, and boomwhackers, pitched tube instruments used to create rhythms and grooves, also will be among the eclectic mix of education sessions. 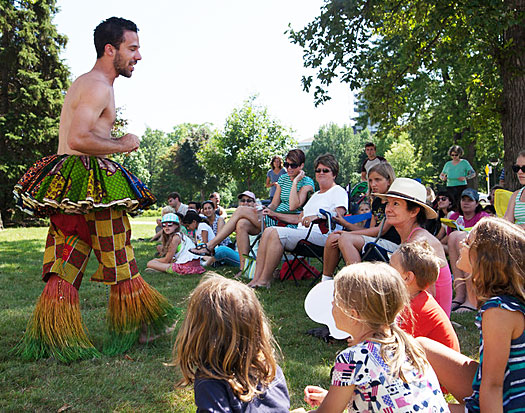 One of the new workshops this year will feature Jose Corey Torres, a 2012 Lawrence graduate also known as “Knowledge.” Torres will lead three different hip-hop poetry and beats workshops for ages 8-12, 13-16 and 17 through adult.

Torres, who grew up in New York City’s Harlem neighborhood, was inspired by Ramagopal Pertl’s passion for the festival’s music education events to get involved this year.

“I’m someone who loves working closely with people,” said Torres, a firm believer in the power of spiritual awareness. “It’s always a good feeling when someone sees the gift you have and encourages you to share that gift with others who could benefit from it.

“We all have a story to tell, some are aware of the power it holds and some are not,” Torres added. “Through my artistry I strive to be a positive resource for those who need the extra push.”

“There are a lot of reasons Mile of Music has taken on such a unique flavor, but the fact that we have such an amazing institution like Lawrence University as a core partner has been one of the keys from the start.”
— Dave Willems, Mile of Music co-founder

Torres said his workshops will focus on the art of writing lyrics.

“Writing song lyrics is much easier than people think. I’d love to share why songs are written and help bring the artistry out of those who choose to participate. When I first wrote a song as a teenager, it derived from my personal experiences I felt needed to be expressed outwardly. What started out as a journal entry, later turned into a song. Since then I’ve been super connected to the art of writing and projecting my lyrics on different styles of beats.”

Ramagopal Pertl said Torres’ artistry and ability to make people feel comfortable made adding him to the team “a slam dunk.”

“Corey is a fantastic artist and an incredibly genuine human being. I knew from my first conversation with him that he needed to be part of the team,” said Ramagopal Pertl. “Hip-hop is a great opportunity to dive deep into the ideas and emotions and express them back in poetry and music. It is an important and relevant art form that our community will love to experience.”

Also new to this year’s education sessions is a collaboration with the Fox Valley Chapter of the National Alliance on Mental Illness (NAMI), featuring singer/songwriter Paul Demer and other musicians who have addressed mental health through the power of music.

Among the new members of the music education team this year is Matthew Arau, assistant professor of music education and associate director of bands at Lawrence. His close relationship with the large brass instrument manufacturing company Conn-Selmer will enable the festival to host its first pBone fun zone. Conn-Selmer will provide 40 colorful pBones —plastic trombones — so anyone, even those with no previous experience can learn how to play the trombone.

“There are a lot of reasons Mile of Music has taken on such a unique flavor, but the fact that we have such an amazing institution like Lawrence University as a core partner has been one of the keys from the start,” said Willems. “To be able to weave that creativity, talent and passion from the educators into our overall program and to do it so seamlessly, has been a difference-maker for us.”

Beyond the music educators, Lawrence alumni will be well represented on the performance stages by 2016 graduate Mariantonia Longhi, Ross Catterton ’08, The Crowe Brothers and Porky’s Groove Machine.

Founded in 1847, Lawrence University uniquely integrates a college of liberal arts and sciences with a nationally recognized conservatory of music, both devoted exclusively to undergraduate education. It was selected for inclusion in the book “Colleges That Change Lives: 40 Schools That Will Change the Way You Think About College” and Fiske’s Guide to Colleges 2016. Engaged learning, the development of multiple interests and community outreach are central to the Lawrence experience. Lawrence draws its 1,500 students from nearly every state and more than 50 countries.