Lawrence University’s own 15-member Balinese gamelan ensemble —Gamelan Cahaya Asri — closes the college’s 2017-18 World Music Series with a performance Sunday, May 20 at 3 p.m. in the Lawrence Memorial Chapel. The concert is free and open to the public. 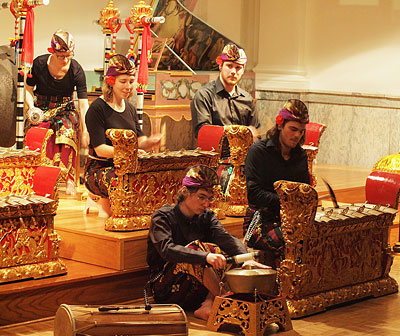 Joining Gamelan Cahaya Asri will be the 14-member community gamelan — Gamelan Sekar Kemuda — which includes players as young as 13 and as old as 82. A children’s gamelan of 11 students aged 5-10 years old, also will perform.

The concert will include a performance by Chicago-based Balinese dancer Claire Fassnacht. A 2013 Lawrence graduate, Fassnacht leads gamelan and dance workshops, private lessons and cultural lectures. She has performed as a musician and dancer with several gamelan ensembles in the U.S. and Bali, Indonesia. From 2015-17, she was a dancer and musician with MIT’s Gamelan Galak Tika in Boston.