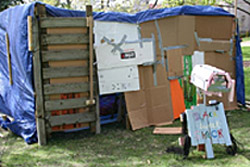 Each May for the past four years, teams of Lawrence University students have done their best HGTV “Design on a Dime” impersonation on behalf of Habitat for Humanity.

Since its debut in 2002, Shack-a-thon has raised nearly $18,000. Organizers hope this year’s event on May 20-21 will enable them to reach their goal of $25,000 — enough to partner with other area organizations to sponsor the construction of a Habitat for Humanity home in the Fox Cities.

“When you’re living in a warm, dry room on a residential college campus, it is incredibly easy to forget about other people who are not so fortunate,” said Lawrence senior Elizabeth Hermanson, who is heading up this year’s event. “Although it’s not completely realistic, Shack-a-Thon does provide students with a first-hand, one-night experience with homelessness. Not only are students forced to think about homelessness and affordable housing issues, but they are active participants in the fight against homelessness by fundraising for Habitat.

“There is a huge need in this country, Appleton included, for affordable housing, and many Lawrentians have taken it upon themselves to work toward reducing that need,” Hermanson added. “As we enter our fifth year, we are just $7,000 shy of reaching our goal and making a very tangible difference in the community in the form of a co-sponsored Habitat house. We hope this is the year that goal is finally realized.”

Habitat for Humanity homes in the Fox Cities typically costs about $75,000 to build. Locally, Habitat constructs on average 10-14 houses a year and this year’s allotment is already all accounted for. Should Shack-a-thon reach its goal this weekend, the LU campus chapter of Habitat would likely partner with two other area organizations to sponsor construction of a home in 2007.

Beginning early Saturday afternoon, students will construct makeshift houses out of donated and salvaged materials while competing for the title of “Best Shack.” Appleton Mayor Tim Hanna and retired Appleton physician Dr. John Mielke will serve as honorary guest judges for this year’s Best Shack competition. Cash “votes” can be cast in the form of donations to change jars located in front of each shack. The shacks will remain up until mid-morning Sunday and at least one member of each team will be required to remain overnight in the shack.

Shack-a-thon 2006 will operate on a “Shackopoly” theme, complete with Chance and Community Chest cards, a “jail” and even the famous GO square stocked with information on homelessness and affordable housing issues.

Thanks to the generous support of The Boldt Company, which has thrown its construction muscle behind this year’s event, all participants will be outfitted with Shack-a-thon tee shirts supplied by the construction firm.

Day, a 1960 Lawrence graduate, is one of the founding volunteers of the Fox Cities chapter of Habitat for Humanity. Actively involved with the organization on a wide variety of fronts since its inception in 1993, Day was honored as Habitat’s “Volunteer of the Year” in 2004. Kravic, a 17-year-old student, moved with her family in 2000 into the Fox Cities’ first all-women built Habitat home.

Storyhill, an acoustic guitar folk duo whose music has been called “a cross between the Indigo Girls and Simon and Garfunkel,” will perform an outdoor concert on Main Hall green beginning at 8 p.m. A suggested $10 donation, with proceeds going to Habitat, is being asked from those attending the concert.

John Weyenberg, executive director of the Fox Cities chapter of Habitat for Humanity and George Elias, a member of the organization’s board of directors, will discuss Habitat’s efforts to promote “green building” practices in the second installment of Lawrence University’s environmental studies lecture series on green architecture.

Habitat for Humanity is the only large-scale home builder in the country that adheres to “green building” standards in an effort to provide more energy-efficient and durable housing at the lowest possible cost for its partner families.

In addition to providing an overview of Habitat’s environmental initiatives to promote cost-effective, best-practice construction methods, Weyenberg and Elias will discuss the Fox Cities “ReStore” operations. Opened last September in a former grocery store on Appleton’s east side, Habitat’s ReStore is a retail store that sells reusable and surplus building materials to the public, providing quality construction materials at reduced costs.

A retail hybrid of Goodwill and Home Depot, the Appleton ReStore center is one of only three such operations in Wisconsin. Staffed completely by volunteers, all profits from ReStore sales are used to fund local Habitat house construction. Since it opened, ReStore has averaged $20,000 in sales per month.

Weyenberg has directed the Fox Cities chapter of Habitat for Humanity since 1999. Elisa has been a member of HFH’s board of directors in 2003.

The environmental lecture series is sponsored by the Spoerl Lectureship in Science in Society. Established in 1999 by Milwaukee-Downer College graduate Barbara Gray Spoerl and her husband, Edward, the lectureship promotes interest and discussion on the role of science and technology in societies worldwide.

Nearly 20 teams of students representing the gamut of campus organizations will transform the Lawrence University Main Hall Green into a temporary shantytown May 14-15 for the college’s fourth annual “Shack-a-thon.”

The fund-raising activity, which supports Habitat for Humanity, challenges the design creativity and engineering skills of students, who will construct make-shift “homes” from donated and salvaged materials on 10-foot-by-10-foot plots near Main Hall beginning early Saturday afternoon. The shacks will remain up until mid-morning Sunday and at least one member of each team will be required to spend the night in the shack.

“Change jars” will be placed in front of each shack with cash donations serving as votes for a “best shack” contest. An on-site host tent will provide information on issues related to homelessness and the need for affordable housing.

“The idea behind Shack-A-Thon is to not only raise money for Habitat for Humanity, but also to raise awareness about the reality of some of the serious housing issues that we face as a nation,” said Brian Hilgeman, one-time events coordinator for the Lawrence Volunteer and Community Service Center, which is sponsoring the event. “We want to provide a fun atmosphere where students as well as members of the Appleton community can think about problems such as homelessness or affordable housing.”

Shack-a-thon organizers raised more than $4,800 at last year’s event and hope to top that figure this year. All proceeds raised by the event are earmarked for the eventual construction of a Lawrence sponsored Habitat for Humanity home in the Fox Cities.

More than 200 students will join forces to transform the Lawrence University Main Hall Green into a temporary shantytown May 15-16 for the college’s third annual “Shack-a-thon” for Habitat for Humanity.

Sponsored by the Lawrence Volunteer and Community Service Center, Shack-a-thon will test the design moxie and construction skills of more than 20 teams of students who will assemble living quarters from donated materials on 10-foot-square plots near Main Hall beginning early Saturday afternoon. The shacks will remain up until mid-morning Sunday.

Teams will be soliciting pledges for having at least one member remain in the shack overnight to simulate the plight of the homelessness. “Change jars” will be placed in front of each shack with cash donations serving as votes for a “Best Shack” contest. A host tent on site will provide information on issues related to homelessness and the need for affordable housing.

Jill Wiles, Habitat for Humanity’s Campus Chapters Coordinator for the Midwest out of Chicago, will deliver the address, “Low Income Housing and the Mission of Habitat for Humanity” at 7 p.m. Saturday. In addition, live entertainment provided by some of Lawrence’s best student bands will be performed throughout the evening beginning at 5 p.m.

Shack-a-thon organizers are hoping to raise $5,000 at this year’s event. Since Shack-a-thon was launched in 2002, the event has raised $9,000. All event proceeds will be used for the eventual construction of a Habitat for Humanity home in the Fox Cities. For more information, contact the Lawrence VCSC at 920-832-6644.

Lawrence University’s Main Hall Green will be transformed into a temporary shantytown the weekend of May 17-18 when the Lawrence Volunteer and Community Service Center sponsors its second annual “Shack-a-thon” for Habitat for Humanity.

Teams of students will construct shacks from donated materials on 10-foot-by-10-foot plots near Main Hall beginning Saturday at 2 p.m. and remaining up until mid-morning Sunday. Teams will be soliciting pledges for having at least one member remain in the shack overnight to simulate the feeling of homelessness. Change jars also will be placed in front of each shack. Cash donations to the jars will be counted as “votes” for a best shack contest. A host tent on site will provide information on issues related to homelessness and the need for affordable housing.

Shack-a-thon organizers are hoping to construct 20 shacks and raise $10,000 at this year’s event. Last year’s Shack-a-thon featured 12 shacks and raised $5,000. All proceeds will to be applied toward the construction of a Habitat for Humanity home in the Fox Cities. For more information, contact the Lawrence VCSC at 920-832-6644.