Former U.S. Ambassador to India and Lawrence University graduate David Mulford returns to his alma mater to share his insights on the global economy and offer a first-hand reflection on the United States’ role in international finance.

Mulford presents “Packing for India: A Life of Action in Global Finance and Diplomacy,” an address based on his 2014 book of the same name, Wednesday, April 22 at 7 p.m. in the Warch Campus Center cinema. The event is free and open to the public. Copies of his book will be available for purchase.

From a perspective that includes New York boardrooms, the Treasury Department and the emergence of India as a world economic power, Mulford will discuss the underpinnings, vulnerabilities and promise of a global economy as well as reflect on some of the key world events that occurred during his lengthy tenure in public service.

Mulford spent five years (2004-2009) as U.S Ambassador to India, a period in which U.S.-India relations underwent a dramatic shift and the two countries began working more closely together on a wide range of issues. 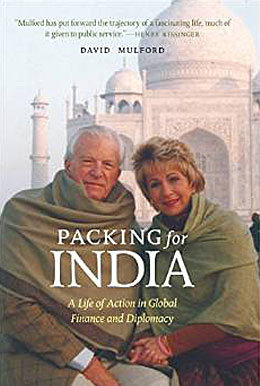 After graduating with a bachelor’s degree in economics from Lawrence in 1959, Mulford earned a master’s degree in political science from Boston University and a Ph.D. from Oxford University.

Lawrence recognized Mulford with an honorary Doctor of Laws degree in 1984. A football and track standout as an undergraduate, Mulford also was inducted into Lawrence’s Athletic Hall of Fame in 2000.

David Mulford, a 1959 graduate of Lawrence University, has been named the United States’ newest ambassador to India.

A well-known investment banker and current chairman of Credit Suisse International, Mulford was confirmed by a voice vote of the U.S. Senate this week to serve as the next American envoy to India. He replaces Robert Blackwill, who left New Delhi after a two-year term, to join the National Security Council.

Nominated for the ambassador’s post by President Bush in November, Mulford previously had served as under secretary for international affairs in the administrations of presidents Ronald Reagan and George Bush Sr.

A native of Rockford, Ill., Mulford earned a Ph.D. from Oxford University after leaving Lawrence and has written two books on Africa. In 1984, Lawrence awarded Mulford an honorary Doctor of Laws degree at its commencement ceremony. A standout football player and track athlete as an undergraduate, he was inducted into Lawrence’s Athletic Hall of Fame in 2000.

Before joining the government, he was the chief investment adviser to the Saudi Arabia Monetary Fund and a consultant on foreign debt issues.