Lawrence University is among the country’s top “green” colleges according to Sierra Magazine’s seventh annual “cool school” rankings released in the September/October edition of the environmental publication.

In compiling its ranking, Sierra relies on a point scoring system based on goals and achievements in 11 categories: co-curricular, energy supply, food, innovation, planning, purchasing, transportation, waste management, financial investments, water management and instruction/research. Possible points per category varied from 34 (purchasing) to 249 (energy) with a total maximum score of 1,000. Lawrence finished with a total score of 627.19.

The sustainability efforts that helped Lawrence’s ranking include:

• Obtaining 25 percent of all of its food use from local sources.

• 100 percent use of recycled paper on campus for photocopying and letterhead.

• Diverting 35 tons of kitchen waste to the on campus, student-run sustainable garden for composting.

• Generating 25,364 kilowatt-hours of electricity in the past year through solar panels on Hiett Hall , saving more than 40,000 pounds of carbon emissions.

• Initiating a $5 per student, per term sustainability fee, proposed and approved by students, last fall to support proposals for infrastructural changes contributing to the sustainable operation of the university.

• Operating a 120-foot, 50-kilowatt wind turbine at Björklunden, the college’s northern campus in Door County, that provides approximately 30 percent of the lodge’s energy. The turbine eliminates nearly 75 tons of carbon emissions per year and reduces annual electrical costs at the lodge by more than $8,400.

“It’s always gratifying to be recognized for our sustainability efforts by Sierra Magazine,” said Gregory Griffin, director of the LEED gold-certified Warch Campus Center and longtime member of the University Committee on Environmental Sustainability. “It publicly underscores Lawrence’s commitment to being a more sustainable campus. But we’re certainly not complacent and want to do even better moving forward. A car share program and a partnership with a local biodigester to process post-consumer food waste are two of the new initiatives we’re planning to launch during the upcoming academic year.”

Lawrence’s utility bill and carbon footprint both will  get a little smaller thanks to the recent installation of a 20-kilowatt solar panel on the roof of Hiett Hall. Through the efforts of Green Roots to secure funding for the project, approximately $65,000 of the solar panel array’s $77,000 cost was covered by grants and rebates from WE Energies, Wisconsin Focus on Energy and Solar Innovations Inc.

The estimated payback on the project’s initial investment is approximately six years with an expected useful life span of the panels of 30-40 years.

The Hiett Hall installation is the second solar panel array on campus. Lawrence first tapped the sun’s rays in 2010 with a 2.92-kilowatt solar unit on the roof of Youngchild Hall. That panel, which was installed primarily as an educational tool for environmental studies courses, already has generated more than 4,700 kilowatt hours of electricity while reducing the college’s carbon dioxide production by nearly five tons. 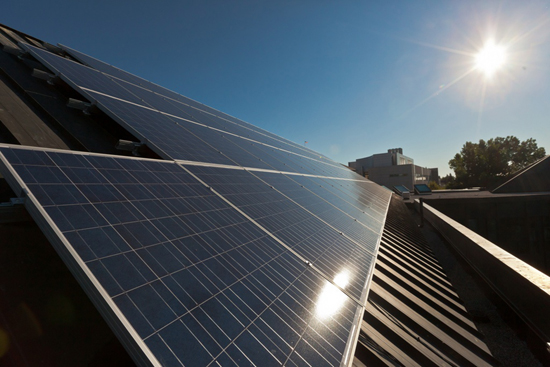