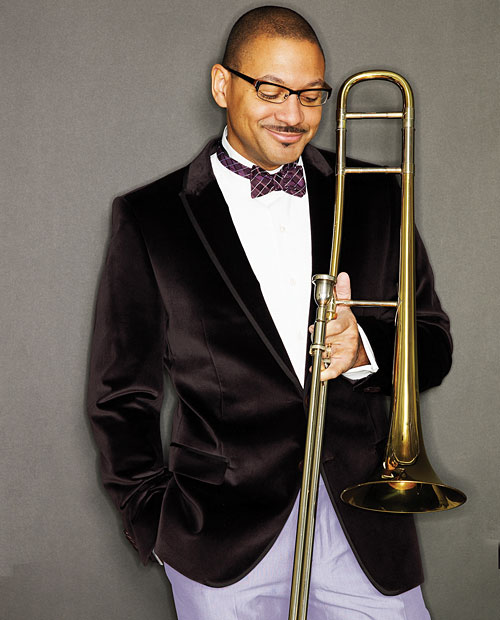 The Delfeayo Marsalis Quintet takes the stage of the Lawrence Memorial Chapel Saturday, May 13 at 8 p.m.

A member of the iconic Marsalis family — father Ellis and brothers Branford, Wynton and Jason—Delfeayo has carved his own space in the jazz world as a trombonist extraordinaire, producer and composer.

Hailed as “one of the best, most imaginative and musical trombonists of his generation” by the San Francisco Examiner, Marsalis has toured internationally with renowned bandleaders Art Blakey, Abdulla Ibrahim, Elvin Jones, Slide Hampton and Max Roach as well as leading his own groups.

Tim Albright, assistant professor of music at Lawrence who teaches trombone, says one word comes to mind whenever he listens to Delfeayo Marsalis: tasty.

“Each line is just right, every note is where it should be,” said Albright. “His sense of style and timing are vibrant and spot on. In Delfeayo’s warm sound and excellent lines you can hear a nod to the masters such as J.J. Johnson and Curtis Fuller and a look to the future. I can’t wait to have him here at Lawrence.”

Marsalis released his debut album as a leader in 1992, the Bible inspired “Pontius Pilate’s Decision” while 2014’s “The Last Southern Gentlemen” showcases his technical expertise and reveals his frequent touches of humor, such as his playful rendition of “Can you tell me how to get to Sesame Street?”

Last fall, in response to one of the country’s most unusual presidential elections, Marsalis and his big band —the Uptown Jazz Orchestra — released their debut album, “America Great Again!,” a collection of American music spanning African roots to the streets of Marsalis’ hometown of New Orleans.

“Each line is just right, every note is where it should be. His sense of style and timing are vibrant and spot on.
— Tim Albright, assistant professor of music

“Having the master trombone player, Delfeayo Marsalis, close our Jazz Series for this year will be an honor,” said Encarnación. “I’m confident Delfeayo will provide his audience an extraordinary musical experience with his remarkable technique and fresh, innovative imagination. This is a concert not to be missed.” 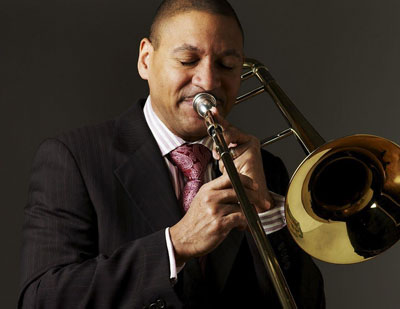 A prolific producer, Marsalis has overseen nearly 100 albums, beginning with is father’s “Syndrome” album in 1983 when he was only 17 years old. Additionally, he has produced albums for his brothers Branford and Wynton, Harry Connick, Jr, Spike Lee, Terence Blanchard, Lincoln Center Jazz and many other artists.

His family’s contributions to American music earned Delfeayo, his father and three brothers the nation’s highest jazz honor – a National Endowment for the Arts Jazz Masters Award in 2011. It was the first group award the NEA Jazz Masters had ever given.