Former Lawrence Professor, Mark Frazier, presently co-director of the India China Institute at the New School in New York City, will give the second Povolny lecture this fall tomorrow night at 7:30 PM in the Wriston Auditorium.  The title for his talk is “Who is Xi?  Knowns and Unknowns in China’s Political Future.  For more information see Frazier talk_ Oct 2012

“Made in China.” What Does It Mean?

The U.S. has been running large trade deficits with China.  Many view this result as arising from the excessive purchase of goods that carry the “Made in China” label.  Hale and Hobijn, in a recent Federal Reserve Bank of San Francisco Economic Letter, provide evidence to the contrary.  They use data from several U.S. governmental sources to answer three questions:

Their answers are as follows:

Given these results, why is it the common perception that a much larger portion of goods consumed in the U.S. come from China.  The answer can be inferred from Table 1 in the report, which indicates that 35.6% of clothing and shoe expenditures bear the label “Made in China” and 20.0% of furniture and household equipment bear the same level.  These two categories, however, only account for 3.4% and 4.7%, respectively, of U.S. personal consumption expenditures.

These data suggest that our concern with the purchase of imports from China is overblown and that a tariff on Chinese goods will have modest, if any, effect on aggregate U.S. personal consumption.

Who is Dominique Strauss-Kahn? Why Should Anyone Care?

Answers to the first question are obvious.  Strauss-Kahn is the Managing Director of the International Monetary Fund.  As undoubtedly you have heard, he was arrested recently for sexually attacking a maid in his luxury suite at a New York Hotel.  He also was expected to be a strong candidate for the Presidency of France.  His exit from the political scene is imminent.

Why should we care?  Martin Wolf in yesterday’s Financial Times answers that question. I encourage you to read the full article but the operative words are as follows:

“Mr. Strauss-Kahn proved to be a bold decision-maker, an effective politician and a competent economist.  This combination is very rare.  None of the candidates under discussion is likely to do the job as well as he did during the worst of the global and then eurozone financial crises.”

If energy independence really gets your juices going, you have to be inspired by Allen Sanderson’s Declaration of Independence in the Chicago Tribune, March 30th.

For too long, the United States of America has been at the mercy of foreign interests — and nations in faraway lands that are often at odds with our core values — when it comes to the production of perhaps the vital resource that drives our economy. We remain far too dependent on this imported commodity that could, in the time of emergency or international political crisis, be denied to us and thus cripple our productivity and reduce us to quivering masses of migraines in a matter of hours. The time for change is now.

I speak, of course, of our complete dependence on coffee that we are importing mainly from Brazil and Colombia. It’s time to wean ourselves from this harmful addiction. My “Coffee Independence” proposal is the key first step.

We may constitute only 5 percent of the world’s population, but we consume fully a third of the planet’s coffee. This nation runs off coffee, most all of it from a sketchy continent. Should we be cut off by one of these sources, for our caffeine fix we’d be forced to drink Coca-Cola for breakfast as well as 10 other times a day.

Our most recent census figures reveal that Detroit lost 25 percent of its population from 2000 to 2010, including those who moved from the city as a result of continuing dismal performances by the Lions and Pistons. And the great state of Michigan as a whole lost population and faces one of the highest unemployment rates in the country.

Thus my administration will propose that we begin immediately to invest in this city and state and turn them into the coffee capital of North America. It will create jobs, jobs, jobs; stimulate economic development; and put Michigan back on the map. After all, it was a beer that made Milwaukee famous, and cows that turned Wisconsin into America’s Dairyland. Why not think of Michigan when you think of mocha?

Going without our morning venti half-caf latte and afternoon frappuccino grande will take some time to get used to, of course. As will building the hothouse infrastructure, turning seedlings into hearty trees; and fully implementing our “Cash for Coffee” stimulus program. And until those beans can be picked by American workers who are paid a living wage, have great health care benefits, 40l(k)s and union representation, this will call for shared sacrifice.

To complement this initiative, I will also propose to Congress that we invest in Florida orange juice production, Nicorette gum and California wines, all 100 percent American products. (And we can thus reduce Brazil to a nation known only for its Carnival, bikini waxes and getting suckered into hosting the 2016 Olympic Games.)

Once fully implemented, we will then turn our full attention to growing cocoa in New Hampshire, a state that figures prominently in the 2012 primaries, instead of importing our secondary caffeine and fat additions — chocolate — from the Ivory Coast and Ghana. After that we will move on the idiom — “For all the tea in China” — and have farmers in another early primary state, Iowa, convert some of their corn (aka ethanol) acreage to tea, thus stopping the flow of American dollars to China and India.

And then for the final phase, I am fully prepared to give new meaning to the term “Banana Republic.”

Any president, past, present and future

Allen R. Sanderson teaches economics at the University of Chicago. 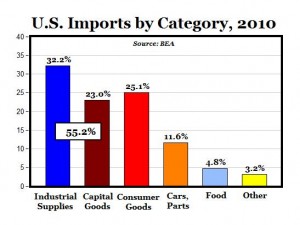