“Pencil-necked academics” and the VSL

H. Spencer Banzhaf has a very cool piece in the new Journal of Economic Perspectives on the intellectual history of the concept of the value of a statistical life (VSL).  This evidently owes some debt to work at the RAND Corporation, where analysts were addressing the “classic problem” of maximizing damages to the enemy subject to a budget constraint.  The proposed solution of sending up lots of vulnerable decoy planes to distract the Soviets, however, hit a snag with the Air Force:

While RAND was initially proud of this work, pride and a haughty spirit often go before a fall. RAND’s patrons in the US Air Force, some of whom were always skeptical of the idea that pencil-necked academics could contribute to military strategy, were apoplectic. RAND had chosen a strategy that would result in high casualties, in part because the objective function had given zero weight to the lives of airplane crews. In itself, this failure to weigh the lives of crews offended the US Air Force brass, many of whom were former pilots.* (Banzhaf 215).

In response, some of the big thinkers at RAND, including legendary UCLA economists Jack Hirshleifer and Armen Alchian, went to work framing the problem.

In our society, personnel lives do have intrinsic value over and above the investment they represent. This value is not directly represented by any dollar figure because, while labor services are bought and sold in our society,human beings are not. Even so, there will be some price range beyond which society will not go to save military lives. In principle, therefore, there is some exchange ratio between human lives and dollars appropriate for the historical context envisioned to any particular systems analysis. Needless to say, we would be on very uncertain ground if we attempted to predict what this exchange ratio should be.

But picking out what the exchange ratio should be is exactly what the Value of Statistical Life is all about.  So, eventually, Thomas Schelling picked up on the problem with Ph.D. student Jack Carlson, culminating in Schelling’s 1968 piece, “The Life You Save May Be Your Own” exploring tradeoffs in willingness to pay for reductions in microrisks.  According to Banzhaf, Schelling’s contribution was to make the connection between public policy tradeoffs between lives and equipment and individual decisions involving risk (e.g., taking “hazard pay” that provides a premium for taking more dangerous assignments) (Banzhaf 222).

Earlier this term I gave the Freshman Studies lecture on Schelling’s Micromotives and Macrobehavior and spoke extensively about microrisks, though I was not aware of this particular contribution.  I guess I will put that incorporate that if I give another talk next year.

References after the break.

* Banzhaf also gives us a taste of public choice to go along with that:  “But moreover, that failure led RAND’s program to select cheap propeller bombers rather than the newer turbojets the US Air Force preferred” (215).

END_OF_DOCUMENT_TOKEN_TO_BE_REPLACED

Here is a link to the lecture.

Matters of Life and Death 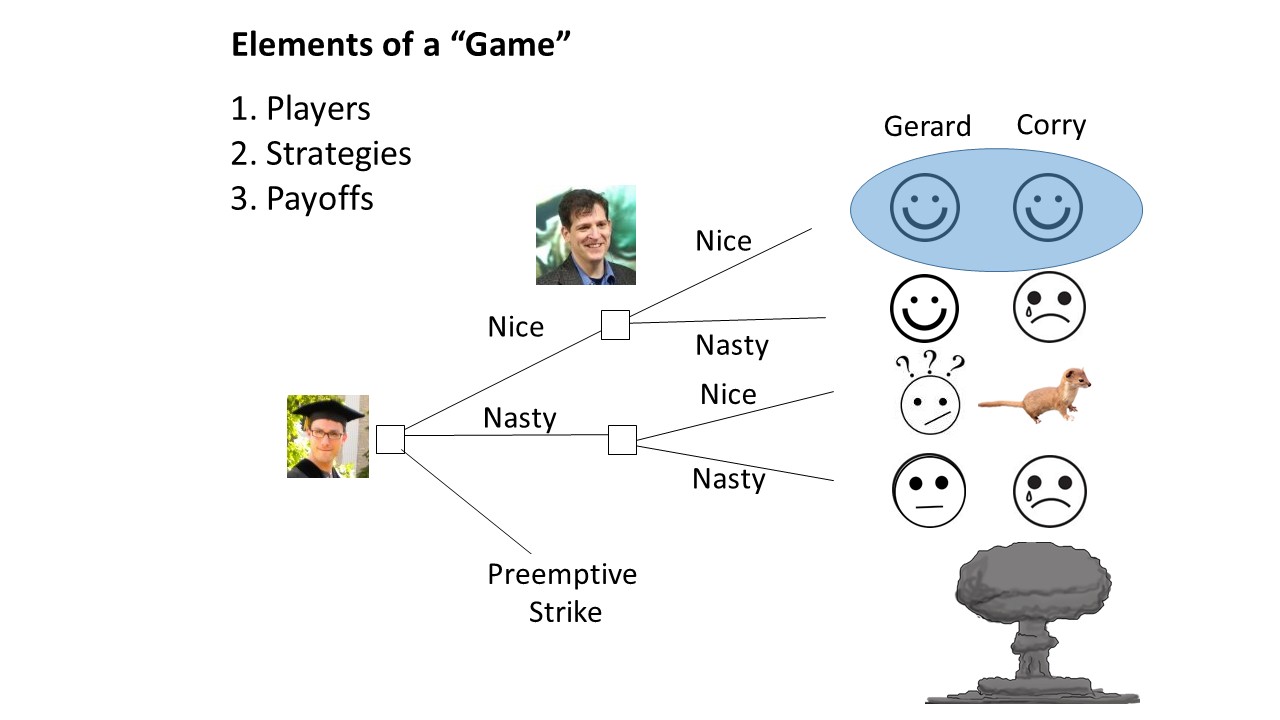 Congratulations to Addison Goldberg and Steve Wasilczuk for their stints as trivia Grand Master and trivia Grand Master’s sidekick, respectively, for this year’s edition of the Lawrence trivia weekend.  These two were in my Freshman Studies class once upon a time, and I still have some documentation from that class to share with them upon graduation.

But for now, I would simply like to share some tips on cooking bacon from the folks at www.thekitchn.com.  First up, here they advise us to just add a little water to the pan. The water separates the fat from the bacon (that is, it renders it) and keeps the fat from splattering.  Here’s all you need to know:

Once the bacon is in the pan, add just enough water to completely coat the bottom of the pan and cook over medium-high heat until the water has evaporated. Reduce the heat to medium and cook the bacon until crisp.

For higher-volumes of bacon, however, I recommend that you forego the stove top altogether and put the bacon into the oven.   It doesn’t get any easier than this: cover a cookie sheet with tin foil, put the strips on top, pop it in the oven at 400F, and 15 minutes later the deed is done.

Once again, congratulations to this year’s trivia masters, and we’ll see you back here next year for the 50th.

And here’s the Lawrence Minute!

The Extraordinary Influence of Freshman Studies

One of my more clever colleagues was telling me how impressed he was with the noticeable effects of our Freshman Studies curriculum, even extending well beyond affecting just Lawrence students and faculty.

How can he be so sure?

Just check out the similarities between this year’s Freshman Studies reading list and the frequently bought together books at Amazon.com.

So, how do you like that?  Some guy camped out in the mountains looking to pick up a copy of The Republic is suddenly prompted to buy a copy of Martin Guerre?

We should have negotiated a lower price.

Is there a bigger champion of the educational movie on campus than Professor Brozek?  I think the answer is decidedly not.   In the spirit (sort of) of last year’s international film series, this term he brings us Forbidden Planet to entertain and enlighten us in ways that only sci-fi movies from the 1950s can.

The movie screens Tuesday, September 21 at 9:30 p.m. in Warch Cinema.  Everyone in Freshman Studies (and beyond?) is invited.

For those of you who had a reasonably normal childhood, here’s the basic storyline:

Forbidden Planet is an adaptation of The Tempest set on the planet Altair IV in the year 2257 – Shakespeare in space suits, essentially. The parallels between the movie and the play are numerous – Dr. Morbius and his daughter, Altaira, are the only human inhabitants of the planet, although they have a faithful servant in Robby the Robot. When a mission from Earth comes to rescue Dr. Morbius, they discover threats (a machine that creates monsters in the crew’s subconscious) as well as romance (Altaira and a young Leslie Nielson as Commander Adams).

Part of the fun of Forbidden Planet – especially in the context of Freshman Studies – is picking out the parallels between the film and the play. It’s also interesting, though, to look at the spots where they diverge – SPOILER ALERT SPOILER ALERT I CAN’T BELIEVE HE SENT ME ALL THESE SPOILERS

If you’d like to read more, check out “Shakespeare in Outer Space: Forbidden Planet as Adaptation of The Tempest,” by Miguel Angel Gonzalez Campos at the University of Malaga.

The target audience is Freshman Studies students, but I don’t think we’re quite that picky.  See you there.

Get Ready for Freshman Studies

Plato is philosophy, and philosophy, Plato, — at once the glory and the shame of mankind…