We are excited to announce that a new set of 16mm films from the LU Archives has recently been digitized and made available on YouTube, thanks to a gift from Mary Jo Powell ’75. The nine films added to the digitized collection span from 1927 to 1973 and include amateur footage as well as professional productions. Some of our favorites include:

Each film is a unique and very meaningful record of a time and place in Lawrence and Milwaukee-Downer’s history. We are grateful to Archives Filmworks for completing the digitization and preservation of the original films and to Mary Jo Powell ’75 for her generous support of this project!

‘Tis the season for presidential campaigning. In the past 100-plus years, Lawrence has received visits from many candidates and campaigners of different party affiliations:

To our knowledge, today’s visit from Bill Clinton will be the first visit by a former president to Lawrence in our history.

Like many similar small liberal arts colleges, Lawrence began actively recruiting and enrolling African American students in the mid 1960s, well into the years of the Civil Rights movement. But Lawrence did not do well with supporting these students once they were here. These problems spurred two protests by the Association of African Americans student organization: one in February, 1969 and another in April, 1972. Shortly after the 1972 protest, President Thomas Smith assembled an “Afro-American relations compendium” and mailed copies to all Lawrence trustees. The compendium includes a letter from President Smith explaining “[his] perspective of what led to the confrontation” and a number of attachments documenting events beginning with the February 1969 AAA protest. It includes memoranda, reports, and statements from the AAA, presidents Tarr and Smith, and the Ad Hoc Committee on Black Student Affairs. (Tucked into the compendium but not included in this digitized version are copies of The Lawrentian dated 1972-04-18 and 1972-04-21.)

In the academic year following the 1972 protest, Lawrence had its highest enrollment to date of African American students – 80 students were enrolled in 1972-1973. Apparently around this time, the Admissions Office enlisted the help of African American students in creating a brochure for prospective students, entitled “Lawrence University Black Students.” The brochure highlights the Association of African Americans, admissions, academics, campus life, and sports. The authors are candid in their introduction: “Lawrence is a challenge, still another one in the chain of challenges black people have to face and overcome. Realizing the great need of the black community for young black college graduates who not only understand the dilemmas of black society but of white as well, we urge you to accept this challenge of Lawrence University.”

To see either of these documents in person or learn more about African American history at Lawrence, visit the Archives. 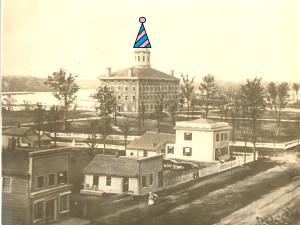 This Friday, January 15th, 2016, is Founders Day at Lawrence. It marks the 169th anniversary of the granting of Lawrence’s charter by the Wisconsin Territorial legislature. In honor of this occasion, we’re hosting an Archives Open House!

Stop by the Archives (Level B in the library) anytime 1-5pm on Friday to:

Very important update: If you are unable to join us in person for Founders Day but would still like to celebrate, perhaps you would be interested in our Founders Day Coloring Book, featuring images from the Archives. 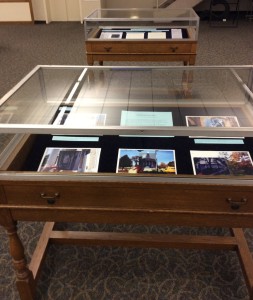 Two new displays by Archives student assistants are on view in the front entrance to the Library: “Rephotography” by Emma Lipkin ’19, and “‘Occupy Lawrence’ (1972): Black Students and White Allies Take a Stand Against Institutional Racism” by colby lewis ’17. Using different means and to different ends, both displays explore a theme of Lawrence “then and now” – how much has changed at Lawrence and how much has stayed the same over time?

“Rephotography” examines our physical space through photographs, both archival and newly captured. Emma re-photographed areas of campus with photographs from the Archives in the foreground. Buildings featured include Ormsby, Colman, and the Chapel.

“‘Occupy Lawrence’ (1972)” features Lawrentian articles and other records documenting a protest led by the Association of Afro-Americans in 1972. Students experiencing injustice and discrimination demanded change from Lawrence’s administration. The display raises the question: “How far have we come?”

October is American Archives Month, and as usual, we have some fun things planned! Mark your calendars for:

Thursday, October 1st, all day: We’ll be participating in #AskAnArchivist Day. Tweet us questions at @archives_lu (our brand new Twitter account!) using #AskAnArchivist. Archivists all around the country will be monitoring this hashtag, so if you’ve got questions about archives and archivists, this is your chance to get some answers. (And if you’re not on Twitter, never fear – keep your eyes peeled for old-school opportunities to ask questions in the library.)

Thursday, October 22nd, 8pm: Back by popular demand, the Haunted Lawrence tour. Join archivist Erin Dix and Scott Breyer from Facility Services as we explore the history of buildings on campus and stories of reported hauntings. Registration will be limited to 20 attendees. To register, please complete this brief form.

In the past year, the Archives provided research assistance for a pair of exciting projects focused on African American history at Lawrence and in the wider Fox Valley community: the History Museum’s “Stone of Hope” traveling exhibit, and Forgotten History, a film by Zach Ben-Amots ’16. If you missed either one, be sure to check them out.

Since this research began, we’ve learned a great deal of new information about early African American students at Lawrence. In the early-mid 20th century, a strong culture of racial exclusion and discrimination developed in the Appleton area. Virtually no African Americans lived in Appleton or attended Lawrence during this time. We now know, however, that before this time, there were a number of African American families living in Appleton and students attending Lawrence. In honor of Black History Month, we want to share the names and stories of some of those students:

– Robert Pendleton – attended the preparatory school, 1857-1859. Family lived in Neenah. Robert ran into controversy when he cast a vote for African American suffrage in a state referendum in 1857.

– Claude Monroe Paris – attended as a freshman and sophomore, 1902-1904. Father was J. M. Paris, a barber and alderman in Waupaca. Claude was voted Class President in his freshman year and played on the basketball, track and field, and football teams. If you look closely, you can see him in this image, which you might recognize from Strange Commons in Main Hall.

– Frederica Brown – graduated in 1917. After Lawrence, she became a teacher and dean at Wiley University for women in Marshall, TX, and then founded the Phyllis Wheatley branch of the Y.W.C.A. in Indianapolis in 1923.

Special thanks to Antoinette Powell for her extensive research on the Cleggett/Hollensworth/Newman families in Appleton. For more information on these students and others, check out the display on the first floor of the library or visit the Archives.

Once again, it’s October, and that means it’s American Archives Month! We have some exciting things going on to celebrate:

All month, through October 31st: A Stone of Hope: Black Experiences in the Fox Cities – This traveling exhibit from The History Museum will be on display on the 2nd floor of the library this month. It explores local African-American history from the 1700s through the present and includes a number of images and stories from the LU Archives. Read more about the exhibit here.

Wednesday, October 8th: Ask the Archivist day – We’ll be answering any and all questions about Lawrence history (to the best of our ability) virtually on Facebook and in person in the library.

Tuesday, October 21st: Archives Film Festival – Join us in the Warch Campus Center Cinema from 7 to 9pm for a showing of recently digitized films from the Archives! The films date from 1929 to 1972 and include amateur film footage as well as professionally produced films about Lawrence. These are fantastic and we’re so excited to share them. Feel free to pop in for any amount of time or stay for the whole show! 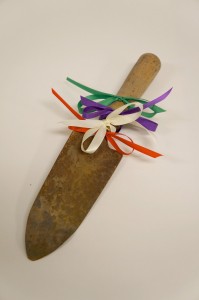 After hours of assigning call numbers, cataloging, photographing, and re-housing, the collection of Milwaukee-Downer College artifacts have been processed.  You may have seen several of these artifacts on display in the Milwaukee-Downer room of the library, but the remainder being stored in the Archives is extensive and diverse.  The items span the school’s history, starting in 1895 to the consolidation with Lawrence in 1964: class jackets, beanies (which may one day make a come-back as a fashion staple around campus), a Hat Hunt toothbrush, and the yellow class’s “Foink” to name a few.

The completion of this project not only enhances the organization and use of space in the archives, but the accessibility will grow exponentially.  The artifact descriptions and images are now available to be viewed and researched in our online collections database, allowing students and alumni access to these pieces.