The series, which honors former theatre professor and department chair Fred Gaines (1977-2000), who passed away in 2010, features the work of juniors Emma Brayndick and Zachary Cooper and 2012 graduate Reena Novotnak, who is participating in a year-long internship at The Playwrights Center in Minneapolis, in one night of student-written theatre. 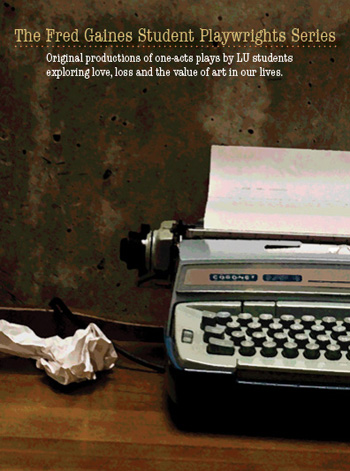 Cooper’s “It’s All Happening at the Zoo” takes place during one frustrating rehearsal of Edward Albee’s famous absurdist play “The Zoo Story.” Brayndick’s “Shifts” is a half-hour slice of life that explores relationship dynamics of four characters in a small used bookstore. “While Our Eyes Adjust,” written by Novotnak, examines the emotional lives of three young art students.

Brayndick said her “Shifts” was inspired by a discussion of the dichotomy between a private conversation and a public setting.

“I had a thought for a couple of characters working in a bookstore and it just sort of grew from there,” said Brayndick, who is neither directing or acting in “Shifts.” “The ‘take home’ message, as corny as it might seem, is be yourself and surround yourself with the people who understand and encourage that you, whoever that may be.”

While she enjoyed writing the play, Brayndick said it’s been even more fun watching it come to life in rehearsals.

“As an actress I have always worked with words from the other side, so it has been an interesting challenge to write a play, but very rewarding to find out that it works outside of my head. That actors can take something that was once just a germ of an idea I had and fill it with life is very rewarding.”

Timothy X. Troy, professor of theatre arts and 1985 Lawrence graduate, launched the play-writing series as a tribute to his former teacher and later department colleague.

“My dear hope is that through our biennial Gaines Series, I can pay forward some of the wisdom I learned from Fred by guiding young artists who are making theatre with each other, for each other,” said Troy.

The three plays selected for the inaugural Gaines Student Playwrights Series were culled from works that originated in Troy’s 2012 play writing class.

“Each class member, all the faculty and staff of the theatre arts department voted on a slate of three plays they thought would work best together as an evening of engaging theatre.”