Lawrence University commemorates Mental Health Awareness Month with a starkly powerful representation of the number of people who die from suicide every day in the United States — 180 empty chairs. 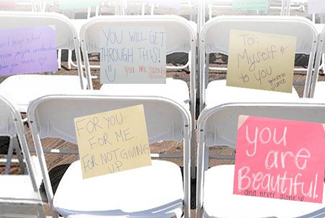 The “Don’t Sit in Silence” event will be displayed Thursday, May 16 from 10 a.m. to 5 p.m. on the plaza outside of the Warch Campus Center. In the event of inclement weather, the chair display will be moved to the gallery area inside the campus center.

Some of the chairs will feature simple postcards with anonymous messages written by Lawrence students, faculty or staff members, expressing both struggle and hope. Others will include self-expression masks that have been created by students over the course of the past three years as part of the on-going initiative designed to portray what we show and what we hide from others.

In addition, a series of stories submitted by students revealing how they have been impacted by someone’s suicide will be displayed.

“This very personal display is our contribution to a month-long series of local events acknowledging the impact of mental illness on so many of us and celebrating the resilience of those who draw hope and strength from others who care,” said Kathleen Fuchs, coordinator of Lawrence’s Lifeline Project and adjunct associate professor of psychology.

In conjunction with the event, a 30-minute film created by senior Sam Schilsky — The Lifeline Project Documentary — about suicide prevention and awareness on the Lawrence campus. The film covers prevention efforts the campus has taken in the past four years and is an informative piece about suicide awareness. It is a collaborative piece supported by multiple grants and Lawrence faculty, staff and students.

“Don’t Sit in Silence” is sponsored by the Lawrence Lifeline Project and the Lawrence Chapter of “To Write Love on Her Arms,” in conjunction with NAMI-Fox Valley and the Northeast Wisconsin Mental Health Connection.