Irish playwright Sean O’Casey’s dramatic story on Ireland’s revolt against British rule will be retold May 9-11 in four performances of Lawrence University’s production of “The Plough and the Stars.” 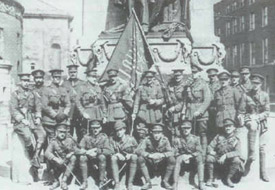 Performances will be staged in Stansbury Theatre of the Music-Drama Center at 8 p.m. each night with an additional 3 p.m. matinee Saturday, May 11. Tickets, at $10 for adults and $5 for students and seniors (free to Lawrence students/faculty/staff with I.D.), are available at the Lawrence Box Office, 920-832-6749.

Written just a decade after the “Easter Rising,” an armed insurrection staged in 1916 with the goal of ending British occupation of Ireland, “The Plough and the Stars” explores the events leading to the uprising as experienced by working-class occupants of a Dublin tenement house. Ten years after the uprising, O’Casey’s poetic portrayal of the still-sensitive subject matter sparked a riot at the play’s 1926 premier at the Abbey Theatre.

“Sudden political changes can spark unforeseen social consequences including divided families, civilian casualties and a crisis of faith in social institution,” said director and Professor of Theatre Arts Timothy X. Troy.”Our production will be thoroughly rooted in the close quarters of a tenement house in Dublin, highlighting the local accent, use of idiomatic language and how people with a variety of perspectives lived in same household.”

Employing both heartbreak and humor, O’Casey’s play focuses on the social and political complexities of the Easter Rising without glorifying violence in the name of freedom.

Junior Erik Morrison, an English and theatre arts major from Denver, Colo., spent the 2012-13 fall term studying theatre in Dublin.  He was cast in the production as Captain Brennan of the Irish Citizen Army.

“It’s great to be able to thank my Irish friends by doing a play central to their history and one that honors what’s best about Ireland and the Irish in times of crisis,” said Morrison. “I couldn’t think of a better play for such a bitterly polarized time in our own country.”