A Fox Cities partnership that has grown steadily stronger for 15 years will be honored Tuesday, Oct. 22 by Lawrence University during the college’s fifth annual Report to the Community.

Lawrence President Mark Burstein will present the fourth annual Lawrence University Collaboration in Action Award to the Boys & Girls Clubs of the Fox Valley. The award recognizes an individual or organization, who, in partnership with Lawrence, has provided exemplary service to the Fox Cities community through strategic vision, leadership influence, long-standing commitment and enthusiasm, financial contributions and/or volunteerism. 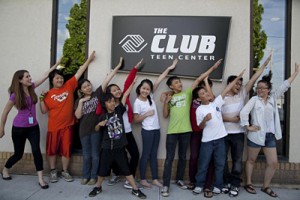 “We want to thank the Boys and Girls Clubs of the Fox Valley for their long and substantial collaboration which has provided Lawrence students with learning experiences and opportunities to serve the greater community,” said Burstein. “We are confident their volunteer activity has made a positive impact on their programs and those they serve.  We hope this service will be a basis for future collaborations.”

Since opening in 1998, the Boys & Girls Clubs of the Fox Valley has established itself as a leader and advocate for youth development throughout the Fox Cities. Lawrence, with its own mission of developing young people into responsible, engaged citizens, has long sought ways to complement and enhance the efforts of the Boys & Girls Club. The mutually beneficial relationship has enriched youth programming at the Club, while providing Lawrence students with valuable leadership and experiential learning opportunities.

During the 2012-13 academic year, 173 Lawrence volunteers, interns and students were involved in community-based learning activities at the Club. 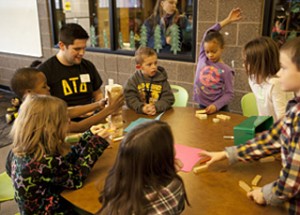 “From the waves of students who came to inform and inspire on Martin Luther King Day this past year to the academic research conducted by students and professors on the impact of the Club on young lives, from powerful mentorship to young people in need through groups like Beautiful You African American Girls’ Group, to the many Lawrence students who have chosen to learn about human services and work at one of our Club locations, the contributions have been many,” said Greg Lemke-Rochon,  chief professional officer of the Boys & Girls Club. “They’ve surprised us by their generosity and creativity, and they’ve made the lives of those we serve richer and brighter.”

The Lawrence partnership with the Boys & Girls Club reached a new level four years ago with a concerted focus on increasing enrichment activities for K-12 youth. With support from the Midwest Campus Compact Citizen-Scholar AmeriCorps Program, Lawrence placed a student volunteer coordinator at the Boys & Girls Club, which helped increase the number of students engaged in a diverse range of programming. The Self Agency in Youth (SAY) initiative, launched in 2012, provides tutoring and mentoring through two support groups — Hmong Youth Pride and Empowerment (HYPE) and Beautiful You African American Girls Group — for the Clubs’ ethnically diverse teenagers.

Approximately 20 Lawrence students volunteer each week with the SAY program, which offers minority teens a sanctuary for self-expression and open discussions of their futures without fear of being judged by their ethnicity or background. 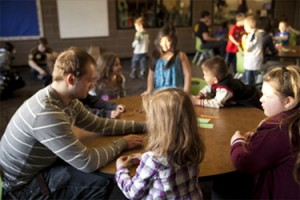 “We are fortunate the Boys & Girls Club of the Fox Valley believe in volunteers and affords them the opportunity to connect their strengths and interests to the needs of area youth,” said Kristi Hill, Lawrence’s director of volunteer and community service programs. “Every year our relationship continues to grow and I am hopeful that we will not only sustain but even expand our collaborative efforts in years to come.”

“Our relationship with Lawrence has provided low-income and at-risk youth with socialization skills, academic guidance and positive role models that we hope can help them ‘break the cycle,’” said Overstreet.

Previous winners of Lawrence’s Collaboration in Action Award include the Mielke Family Foundation (2010), YMCA of the Fox Cities (2011) and the Appleton Area School District (2012).

Earlier this year, Lawrence was named to the President’s Higher Education Community Service Honor Roll for the seventh consecutive year. The honor roll recognizes higher education institutions that reflect the values of exemplary community service and achieve meaningful outcomes in their communities.

Nine hundred and eighty-nine students contributed more than 16,650 hours to community volunteer and service-learning programs in 2012. Lawrence is one of only two Wisconsin institutions that has been cited every year by the Washington, D.C.-based Corporation for National and Community Service (CNCS) since it launched the honor roll program in 2006.