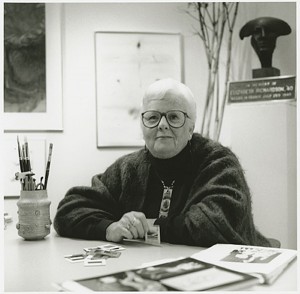 An accomplished artist who specialized in drawing, collage and abstract painting, Case joined the Lawrence art department in 1980 after teaching art classes in suburban Chicago for 21 years. Through her initiative and insistence, Lawrence introduced computer-assisted art courses to the department curriculum in 1987.

In addition to teaching, she directed Lawrence’s art education program, supervising the certification of nearly 50 future art teachers before retiring in 2000. She remained in Appleton in retirement and continued to teach an occasional figure drawing class or tutorial for another four years. Upon her retirement, Case said Lawrence had “changed her life. It was the best thing that ever happened to me.”

Born in Pittsburgh in 1937, Case lived a bit of a nomadic childhood, living in seven different states by the age of 16 before settling in the Chicago area, which she called home until she moved to Appleton in 1980.

She was a two-time recipient of Artist-in-Residency awards to the Vermont Studio Center, one of the country’s leading creative communities for working artists. Her art was showcased in national juried and invitational exhibitions in more than 30 galleries across the country and several of her works were used as compact disc covers for Lawrence Conservatory ensemble recordings.

Alice earned a bachelor’s degree in studio art at Coe College and pursued graduate studies at Northern Illinois University and Bennington College through the Massachusetts College of Art.

She is survived by two daughters, Cathleen Robertson, Appleton, and Marianne Case, Milwaukee.