A Musical Explosion: Lawrence’s Kaleidoscope concert offers something for everyone

“How the program is run, with its quick and condensed snapshots from different groups positioned at various areas throughout the hall, the traveling spotlight, the intensely focused energy and collective bated breath to hold applause until the end of the 75 minutes all make for a very special event,” says Sofie Yang, a senior violinist from Whitefish Bay who will serve as concertmaster of the Lawrence Symphony Orchestra for this year’s Kaleidoscope concert. 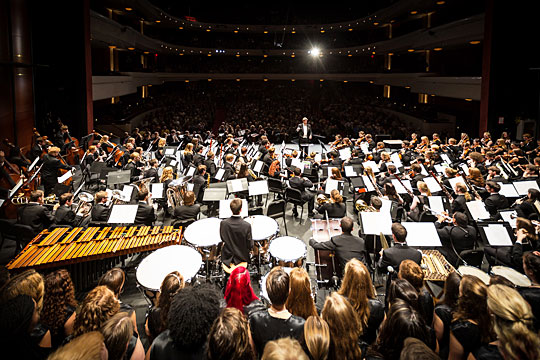 “There is a special atmosphere between the audience and the performers, full of tension and excitement, that is unique to Kaleidoscope,” said Connor, who will perform this year with the Lawrence Wind Ensemble and his new chamber ensemble Slipstream.

“Kaleidoscope is an explosion of exceptional music-making,” said Stephen Sieck, assistant professor and co-director of choral studies who is coordinating this year’s concert. “When I first came to Lawrence, I thought it would be madness to put together such a complicated production as Kaleidoscope in the first few weeks of the year but I now know that Lawrentians always rise to the mightiest of challenges.”

Beyond the concert’s unique format, performing in an off-campus venue like the Performing Arts Center’s 2,072-seat auditorium provides added excitement.

“Playing at the PAC really is special opportunity that I think inspires all of the performers to do their best,” said Connor, who will make his second appearance at Kaleidoscope. “It’s always a thrill to play in such a beautiful space.”

As with its four predecessors, Kaleidoscope5 is sure to offer something that will appeal to even the most discerning music aficionado.

“Kaleidoscope is an explosion of exceptional music-making.”
— Stephen Sieck

This year’s concert will feature 14 ensembles, running the gamut from the 60-member symphony orchestra and the Concert Choir to the more intimate clarinet ensemble and Yang’s Quartet Masque, with which she performed at 2013’s concert.

The program will feature a pair of tributes to the late Fred Sturm, who lost a battle with cancer in August 2014. It was Lawrence’s former jazz studies director who envisioned a concert that incorporated all aspects of the conservatory. 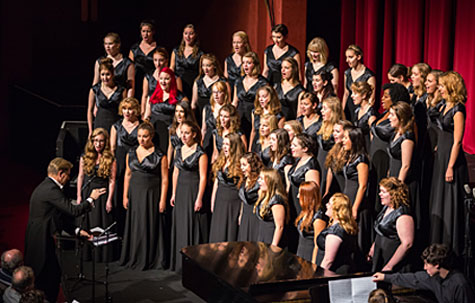 Highlighting the concert will be the world premiere of “The Music Makers”, a massive seven-minute work written on commission by Emmy Award-winning composer and 2010 Lawrence graduate Garth Neustadter, who will return to Appleton from his current home in Pasadena, Calif., to conduct the piece.

At the end of the performance, Yang hopes the audience leaves with an appreciation of the diversity of music and musical experiences, not just at Lawrence but globally.

“What dictates our concert-going experience and what makes it compelling? How can we create concerts from that awareness?,” asks Yang. “The relationship of people and music is a kaleidoscope, always shifting. Everyone should take part in that change.”