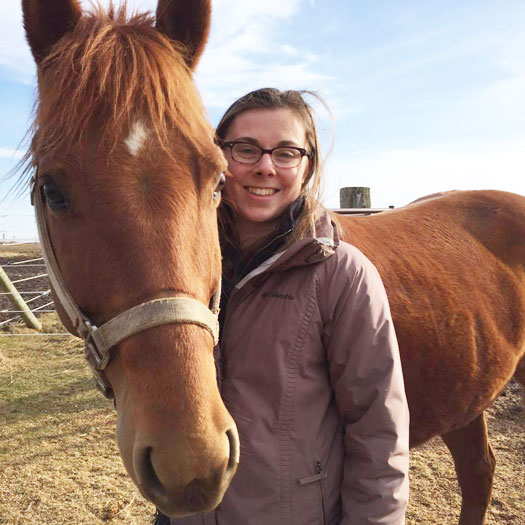 The Gift of Music: Lawrence Conservatory Offerings for Holiday Shoppers

Still looking for a holiday stocking stuffer? A pair of recently released CDs by the Lawrence University Wind Ensemble and Lawrence faculty jazz percussionist Dane Richeson will fit neatly into just about any size stocking.

Performed under the direction of conductor Andrew Mast, the 16-track Wind Ensemble disc features seven pieces performed between 2005 and 2010. It includes six world premieres from Lawrence commissions as well as the first-ever digital recording of Vincent Persichetti’s “Turn Not Thy Face.” 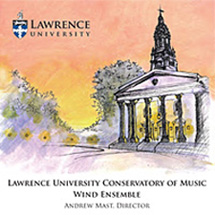 “This disc represents a culmination of several passions of mine – the creation and performance of new music written by amazing friends and colleagues who have all given wonderful gifts of repertoire to the wind ensemble world,” said Mast. “This disc enables me to share and celebrate these treasures.  Additionally, the inclusion of Persichetti’s  “Turn Not Thy Face,” represents the first digital recording of this work by one of my favorite composers. I truly believe there is something for everybody on these two discs and I am incredibly honored that so many people were involved with them, including students from several years of the Wind Ensemble.”

Richeson’s “Maxim Confit” features many of his friends both inside and out of the Lawrence Conservatory of Music. The nine-track jazz disc blends Richeson’s infectious drum work with the musical chops of pianist Bill Carrothers and saxophonist Jose Encarnacion, both colleagues at Lawrence, along with an array of all-star artists outside the campus, including saxophonist David Liebman, guitarist Vic Juris, and fellow percussionists Jamey Haddad (drums), Joe Locke (vibraphone/marimba), and Michael Spiro (bata/congas). 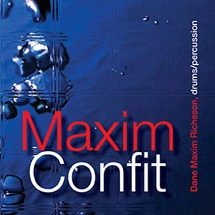 “It was great fun collaborating with so many great friends and colleagues in the music business on this project, some of whom I’ve worked with for years and some of whom I worked with for the first time,” said Richeson. “I’m really proud of this work. It’s raw jazz seasoned with a dash of world percussion from cultures I have been fortunate to live in. The tracks are quite different from each other, which keeps the listener wondering what to expect next.”

Both CDs — as well as several other Lawrence-affiliated recordings — are available at Lawrence Apparel and Gifts in the Warch Campus Center . They can be ordered online as well as purchased in person. 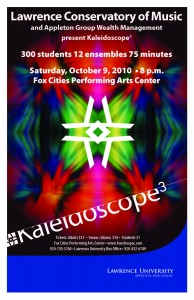 Lawrence University musicians will be exceptionally well represented as performers and composers when the 2005 Wisconsin Music Educators Association holds its annual state conference Oct. 26-29 in Madison.

The award-winning Lawrence University Jazz Ensemble, under the direction of Fred Sturm, will pay tribute to some of Wisconsin’s most notable contributors to jazz with a pair of conference performances entitled “Homage to Wisconsin Jazz Composers” Oct. 26-27 at the Monona Terrace Convention Center. The Lawrence University Wind Ensemble, under the direction of Andrew Mast, will perform Friday, Oct. 28.

The 19-member Lawrence University Jazz Ensemble will be the conference’s opening day featured performer with a Wednesday evening concert and return to the stage first thing again the next morning for a second show. The two performances will feature 10 pieces each, collectively representing the work of 20 different composers and arrangers from across several important Wisconsin jazz constituencies.

“This is both a great honor and a great opportunity for our students to play at the state conference,” said Sturm, whose collegiate ensembles have been cited by Downbeat magazine as America’s best eight times. “There are some terrific jazz programs in Wisconsin and we all vie for a spot on the annual conference program. We submitted some recordings last May and when I found out they offered us two programs, I could not have been more thrilled. This conference is really a wonderful way to showcase our talented student musicians to jazz educators from around the state.”

Mast, in his second year as director of bands at Lawrence, will lead the Lawrence University Wind Ensemble in a four-piece concert at 11 a.m. on Friday Oct 28 at the Monona Terrace. Two of his program’s works will have strong Lawrence ties.
One piece, “My Robin is to the Greenwood Gone,” was composed by Percy Grainger and arranged by Sturm in honor of long-time Lawrence music professor Fred Schroeder, who was the director of bands at Lawrence from 1951-78.

“‘Villanelle’ is a terrific piece originally composed as a contest piece for the Paris Conservatory, so it has moments of both beauty and fire,” said Mast, who was director of Bands at St. Ambrose University in Davenport, Iowa, before joining the Lawrence faculty in 2004. “And the 1998 arrangement of ‘My Robin,’ is a gorgeous and loving setting of this piece that happens to have two great Lawrence connections.”

The 55-member Lawrence University Wind Ensemble is selected from the top wind and percussion students in the Lawrence Conservatory of Music and regularly performs five to seven concerts throughout the academic year, frequently with guest soloists, conductors and composers. Their latest recording, “Air Mosaic” was released in the spring of 2005.