While the annual holiday honoring Dr. Martin Luther King Jr. is a day off from work or school for many, more than 250 Lawrence University students, faculty, staff and local alumni will make it “a day on.” 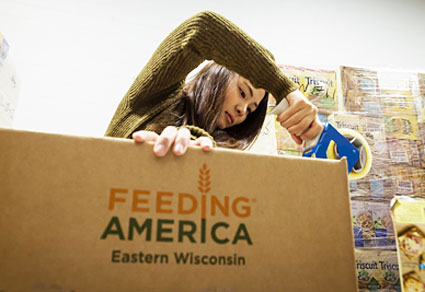 As a prelude to the Jan. 16 annual Fox Cities community celebration of the life of the civil and human rights leader, which Lawrence will host in the Memorial Chapel beginning at 6:30 p.m., Lawrentians will spend part of the day engaged in community service.

Since 2008, Lawrence has honored King’s legacy by providing volunteers to area nonprofit organizations. This year Lawrence volunteers will spend part of the King holiday providing their time and talents to 11 local nonprofit organizations, including the Boys and Girls Club of the Fox Valley, Riverview Gardens, Feeding America Eastern Wisconsin, Homeless Connections and the Bethesda Thrift Shop on a variety of activities, including a new reading initiative for K-6 students at Appleton’s Edison Elementary School.

Prior to the volunteer activities, Lawrence will conduct a Read & Reflect event the morning of Jan. 16 in the Warch Campus Center. The action-based discussion will focus on Marc Lamont Hill’s book “Nobody: Casualties of America’s War on the Vulnerable, from Ferguson to Flint and Beyond.” It will include the sharing of personal experiences of feeling like a “nobody” and action individuals and the campus as a whole can take to better support society’s  most vulnerable members. 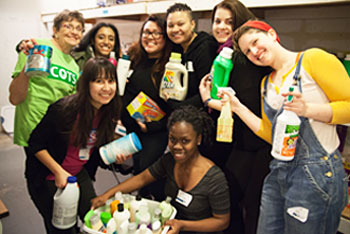 A born mentor, making a difference in people’s lives has been part of Mary Poulson’s modus operandi for most of her 85 years of life.

The long-time Lawrence University faculty member and barrier-breaking coach will be recognized Tuesday, April 19 as the 2016 recipient of the Paul and Elaine Groth Mentoring Award. The award is sponsored by the Mielke Family Foundation.

Poulson will be one of eight community award winners honored for their outstanding efforts at the annual “Celebrating Our Volunteers” dinner at the Radisson Paper Valley Hotel in downtown Appleton. The event, sponsored by The Community Foundation for the Fox Valley Region, Inc. and Post-Crescent Media, has saluted deserving area individuals for their volunteerism since 1998.

The Paul and Elaine Groth Mentoring Award recognizes an individual or group that has served as a mentor in the community over time and has, by example, made meaningful contributions to the quality of life in the Fox Cities.

Poulson was among 21 Milwaukee-Downer College faculty members who joined the Lawrence community in 1964 following the consolidation of the two institutions. During her 29-year career at Lawrence, she mentored thousands of students as a professor of physical education and coach of three sports, helping them discover themselves and find their niche in life.

When she first moved to Appleton, Poulson planned to stay just a year while exploring other options.

“Within weeks of settling in I realized what a special place Appleton was,” said Poulson. “During my 52 years here, friends, teachers and colleagues have provided me with many opportunities to share the fullness of life with others.”

At Lawrence, Poulson became the first woman coach of any sport in the Midwest Conference. A consummate multitasker, she coached women’s tennis —  Lawrence’s first varsity sport for women — men’s tennis and was the driving force behind the move from club status to varsity status of the men’s and women’s fencing teams, which she coached until her retirement in 1993.

In retirement, Poulson’s, and her late husband, John’s, own personal curiosities led to the creation of the Noonhour Philosophers, a free community speaker’s program held weekly at Trinity Lutheran Church in downtown Appleton. For more than 20 years, Poulson has organized and coordinated the program, arranging presenters spanning the spectrum to share their experiences and explore interesting and topical issues.

Patricia Boldt, a 1948 Lawrence graduate who nominated Poulson for the mentoring award, described the Noonhour Philosophers as “a welcoming institution that has made the Fox Cities a more interesting place to live.”

“She is a genius in finding both obscure and obvious presenters,” wrote Boldt.

In addition to running the Noonhour Philosophers program, Poulson has been active in the area’s annual Crop Walk for Hunger and with Leaven, a community based non-profit organization that works with volunteers to assist people in crisis who have basic needs that cannot be met elsewhere.

“All of these opportunities have helped me realize how blessed I’ve been and how generously Appleton residents share their blessings in all areas of life,” said Poulson. “I’m a behind-the-scenes sort of person, so it’s quite humbling to be recognized with the Paul and Elaine Groth Mentoring Award. I am extremely grateful to the Mielke Family Foundation and all those who make these awards possible.”

Poulson is the third Lawrentian to be honored with one of the community volunteer awards. Lynn Hagee, director of special projects at Lawrence, and Rick Bjella, former choral director at Lawrence and artistic director of the White Heron Chorale (now newVoices), received the Hanns Kretzschmar Award for Excellence in the Arts in 2014 and 2006, respectively.

On the day set aside to honor the life and legacy of Dr. Martin Luther King Jr., Lawrence University students put the civil rights leader’s call to service into action. With no classes scheduled for the day, more than 250 Lawrence students provided their time and talents to 16 Fox Cities organizations throughout the community.

Additionally, another 50 student leaders provided their talents to the community through music performances, swing dancing, physical activity and art instruction.

The day began with a student/staff/faculty discussion of education equality in public schools centered around the documentary film “Waiting for Superman.”

“While it’s a privilege to serve with hardworking non-profit leaders, students were encouraged to think about the necessary services these organizations provide and to dream of a day where everyone has the resources necessary to meet their universal human rights,” said Kristi Hill, Lawrence’s director of volunteer and community service programs.

See other stories about Lawrence’s engagement in the community on the Martin Luther King Jr. holiday from Fox 11, NBC-26 and WFRV-TV.

For the eighth consecutive year, Lawrence University has been named to the 2014 President’s Higher Education Community Service Honor Roll.

Lawrence is one of only two Wisconsin institutions to be cited every year by the Washington, D.C.-based Corporation for National and Community Service (CNCS) since it launched the honor roll program in 2006 in response to the thousands of college students who traveled across the country to support relief efforts along the Gulf Coast after Hurricane Katrina.

Nine hundred Lawrence students contributed 17,777 hours to community volunteer and service-learning programs in collaboration with a wide variety of valued partnerships throughout the Fox Cities during this year’s reporting period, including 138 students who devoted 20 hours or more per term.

The President’s Honor Roll program recognizes higher education institutions that reflect the values of exemplary community service and achieve meaningful outcomes in their communities on a broad range of issues. Honorees are chosen on the scope and innovation of service projects, the extent to which service-learning is embedded in the curriculum, the school’s commitment to long-term campus-community partnerships and measurable community outcomes as a result of the service.

“Community service provides ways to better understand ourselves,” said President Mark Burstein, “and involvement in the wider community enhances our learning environment. I am proud of the work and dedication our students display and pleased they have once again been nationally recognized for their efforts. At Lawrence, service continues to be not only altruism, but also part of the transformative educational experience that we strive to provide for our students.”

Among the initiatives for which Lawrence was cited:

• Self-Agency in Youth (SAY) Program. Using a two-pronged approach of support groups and a tutoring/mentoring initiative, the SAY Program helps teens gain ownership over their post-high school futures. Beautiful You African American Girls’ Group and Hmong Youth Pride and Empowerment (HYPE) are two branches of SAY and one of several collaborations between Lawrence and the Boys & Girls Club of the Fox Valley. With backgrounds and challenges similar to those faced by the teenagers, the Lawrence student volunteers turned their own experiences as a refugee or a first generation college student into a source of knowledge to help high school students in need of mentoring, reassurance and support.

• Dr. Martin Luther King Jr. Day of Service. Nearly 500 students participated in activities under the theme of  “learn, serve and celebrate.” Activities included a “Read and Reflect: A Lunch Discussion” event on the book “Why Are All the Black Kids Sitting in the Cafeteria,” six student-led on-campus volunteer opportunities and the presentation of a specially developed curriculum on tolerance to more than 650 area youth at seven after-school sites of the Boys and Girls Clubs of the Fox Valley. Members of the Lawrence community ended the day by joining Fox Cities leaders to listen to Rev. Wanda Washington speak on “How to Build a Just World” at the annual MLK celebration hosted by Lawrence.

“It is a source of pride for everyone at Lawrence who values the college’s contributions to the vitality of the greater Appleton and global communities, that we have been recognized, once again, by the Corporation for National and Community Service for our achievements in community service,” said Mark Jenike, Pieper Family Professor of Servant Leadership and director of the college’s Office for Engaged Learning. “At Lawrence, community engagement, enabled by strong partnerships, is one of the most important ways in which we pursue our mission of preparing students for lives of achievement, responsible and meaningful citizenship, lifelong learning and personal fulfillment.”

The CNCS compiles the President’s Community Service Honor Roll in collaboration with the Department of Education, Department of Housing and Urban Development, Campus Compact and the American Council on Education.