The Lawrence University Wind Ensemble will find itself in the national spotlight when it performs Thursday, March 21 at the 2013 National Conference of the College Band Directors National Association at the University of North Carolina-Greensboro

Lawrence’s wind ensemble is one of only nine from around the country that was chosen for this year’s national convention. Selections were based on submitted unedited audition tapes of live performances.

“Performing at this national conference is an immense honor and each of these incredibly talented and hard-working musicians is going to surprise some people,” said Andrew Mast, conductor of the 58-member ensemble. “I could not be more proud of the incredible work and dedication each student has put into this performance. We’re all excited to represent Lawrence University to a national audience.”

The ensemble will tune up for their moment in the national spotlight by performing twice on the way to North Carolina: March 19 at Worthington Kilbourne High School  in Columbus, Ohio, and March 20 at Athens High School in  Raleigh, N.C. 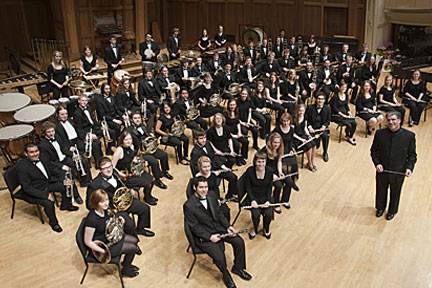 Michael Orr, professor of art history, received Lawrence’s Award for Excellence in Teaching, which recognizes outstanding performance in the teaching process, including the quest to ensure students reach their full development as individuals, human beings and future leaders of society.

A specialist in medieval art and illuminated manuscripts, Orr joined the Lawrence faculty in 1989. He previously received Lawrence’s Young Teacher Award (1992) and the Freshman Studies Teaching Prize (2006). He is one of only eight faculty members presented both the Excellence in Teaching and Young Teacher awards in the program’s 34-year history.

Orr has served as an exhibition consultant for the J. Paul Getty Museum in Malibu, Calif., and been awarded research grants from the National Endowment for the Humanities and the British Academy. Earlier this year, he was named one of 42 American Council on Education Fellows nationally. The program prepares promising senior faculty for responsible positions in college and university administration. Orr will spend the 2009-10 academic year working with the president and senior officers at Macalester College.

President Jill Beck cited Orr’s excellence as a lecturer in presenting his award.

“Students describe your class presentations as ‘amazing, funny, interesting, efficient, and fantastic,'” said Beck “You are thought of as a person with high standards for both student work and your own performance. Your willingness to help each student and your powerful devotion to teaching are sources of great respect.”

Orr earned a bachelor’s degree at the University of London and master and doctorate degrees at Cornell University.

Bruce Pourciau, professor of mathematics, received the Award for Excellence in Scholarship, which honors a faculty member who has demonstrated sustained scholarly excellence for a number of years and whose work exemplifies the ideals of the teacher-scholar. In 2000, he was presented Lawrence’s Excellence in Teaching Award.

A member of the faculty for 33 years, Pourciau has distinguished himself as a scholar with interests spanning the areas of pure mathematics, the history of science and the philosophy of mathematics. He has earned national and international recognition for his analyses of Sir Isaac Newton’s seminal work “The Principia.”

In presenting the award, Provost David Burrows praised Pourciau as person “whose precise and sophisticated thinking brings clarity to the most complex problems and situations.

“Your thoughtful and stimulating scholarly contributions have been an important part of the intellectual life of Lawrence,” said Burrows. “Your concern for the accurate use of language is a hallmark of your scholarship, as well as a source of frank commentary on the writings of others. The breadth and depth of your work are outstanding and establish you as a person of great intellectual achievement.”

Pourciau graduated from Brown University with a bachelor’s degree in mathematics and earned his Ph.D. from the University of California, San Diego.

McGlynn is the author of the 2008 book “The End of the Straight and Narrow,” a collection of nine short stories that examines the inner lives, passions and desires of the zealous and the ways religious faith is both the compass for navigating daily life and the force that makes ordinary life impossible. His fiction and creative nonfiction works also have appeared in numerous literary journals, including Alaska Quarterly Review, Image, and Shenandoah.

In May, the Council for Wisconsin Writers recognized McGlynn with its annual Kay W. Levin Short Nonfiction Award for his essay “Hydrophobia,” which appeared in the Missouri Review.

His scholarship includes the literary analysis of ideas of other authors, George Eliot and Frank Norris among them, the context in which they express their ideas and the connections between their writings and those of others.

“Your outstanding accomplishments in the areas of fiction, non-fiction creative writing and scholarship mark you as a person of exceptional ability,” Beck said of McGlynn. “Your imagination, sense of empathy and mastery of the craft of writing enrich the lives of all who read your work. You are not only a wonderful creative writer but are also an excellent literary scholar.”

Andrew Mast, assistant professor of music and director of bands, received Lawrence’s Young Teacher Award in recognition of demonstrated excellence in the classroom and the promise of continued growth.

In addition to conducting the Lawrence Wind Ensemble and the Symphonic Band, Mast teaches courses in band history, conducting, music education and the Freshman Studies program. Under this direction, the Wind Ensemble was recognized this spring by DownBeat magazine in its annual student music awards competition as the nation’s best in the classical group division, which encompasses chamber ensembles, bands and orchestras from around the country.

He is a frequent guest conductor and has led honor bands and festivals throughout the Midwest, as well as the Pilzen Conservatory in the Czech Republic. He co-founded and serves as president of the Vincent Persichetti Society, an organization dedicated to the work of the prolific 20th-century American composer.

“Your passion, enthusiasm and friendly approach have made you a very successful teacher and a valued member of the Lawrence community,” Burrows said in presenting Mast his award. “Your students hold you in high regard both as a teacher and conductor. Many students in your ensembles describe their experience as transformative, both musically and personally.”