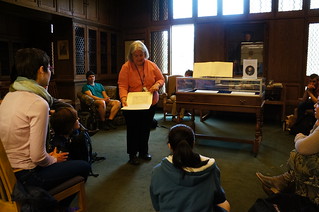 The Mudd Library was recently given the unique opportunity to exhibit an original Mozart manuscript. Technically speaking, it was an autograph (meaning Mozart wrote it himself) leaf (one page, double-sided) from one of his compositions.

To share this artifact with Lawrence students, Music Librarian and Associate Professor Antoinette Powell, and Director of Technical Services and Assistant Professor Jill Thomas put together a presentation focusing on not just the manuscript, but also historical background to put it in context. Antoinette explains:

“By researching and examining the leaf, Jill and I were able to talk about Mozart’s compositional style, the types of materials he used, the history of western Europe at that time and daily life in Salzburg. It was an extraordinary opportunity for students and faculty to see something Mozart touched.”

All of the books Antoinette and Jill used to conduct the research about the score and its historical context came from the Mudd’s collection. Their extensive research revolved around: 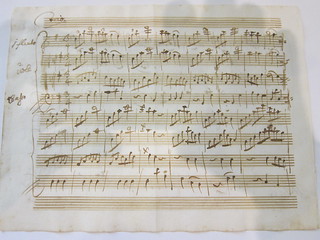 The title of the work is Serenata (Serenade in D major, K. 185.) The leaf we had on loan is from the fourth movement, Menuetto – Trio.   It contained the final 10 measures of the menuetto on one side and the first 16 measures of the trio on the other.

Over 60 people viewed the item over four days in the Milwaukee-Downer room in the Mudd Library. The students and faculty  were primarily from music composition and theory classes in the Conservatory. The students saw the autograph and were able to compare it to a modern published edition, as well as other pieces that were published around the same time and after to analyze the differences in paper making. Antoinette and Jill also showed the students what can be learned about Mozart’s process of composition by examining the leaf, including:

The thoughtful owner of the leaf is a Lawrence University alum from the class of 2010. Although it has been returned to its owner, we are grateful to have had this unique opportunity to share such a rare piece of history with students at Lawrence.