Claire Cannell joined us at the end of July as our new University Archivist. You’ll see Claire at the library reference desk as well as up in the Archives (level B). We’re so happy that Claire has joined us! Read below to get a know a bit about her!

Where did you grow up?

I grew up near Portland, Oregon.

What did you study in school?

I received my bachelor’s in English from Portland State University, where I also minored in Medieval Studies. I recently completed my Master of Library and Information Science at University of Washington.

What do you like to do in your free time?

I like to read, play video games, spend time with friends and family, and explore new places. I also love learning to make/craft new things and especially enjoy cross stitch.

What is your favorite thing about working in a library?

I love meeting new people and getting to learn about their research interests and help them locate relevant materials. It’s allowed me to learn about so many new things.

By now, many of you have reached out to our reference librarians by email, phone, chat, our web form, and now, our reference kiosk.

We provide solid research assistance, as well as help with navigating our wide array of electronic resources.

Have you met Lina? If so, you’ll know she is enthusiastic about helping you and supporting your academic success.

She is also our University Archivist, so she loves providing our community with access to the wealth of primary sources and interesting historical ephemera that she carefully curates.

Read on to learn more about this multi-passionate Reference Librarian-slash-University Archivist-slash-all around wonderful person (and alumna)!

Favorite Database: Artstor, because not only can you find a bunch of things from the Archives and the Wriston Art Galleries, but also art and architecture from around the world.

Pets: Only the squirrels in my backyard

Best part of being a Reference Librarian: Learning something new because of a question someone’s asked

Anything else: Vote! Register to vote, and get your friends and family to do it too- it’s easy and quick, and your civic duty.

People all over the world have accessed honors projects, issues of The Lawrentian, and convocations in the six years since Lux was implemented through the library.

What is this Lux? Lux is the Lawrence University institutional repository, digital home to over 4000 scholarly and creative works of our students, faculty, and staff, as well as select historical documents.

If you are looking for interesting stories from student newspapers or alumni magazines, check Lux! You will find a rich and fascinating history.

Want to peruse recent honors projects? Lux is the place for you.

Interested in reading a Harrison Award paper? Studio Art senior exhibition artwork? Look in Lux. You will find these things and many more.

We hope you enjoy and are enriched by what you find in Lux! Let us know what you think.

The library offers so many resources and services, it can be hard to keep track of all the ways in which we can help you succeed at Lawrence.

Below you’ll find a handy list of just a few ideas for optimizing your experience in the Mudd. How many have you employed?

Are there any other ideas that you would add to this list? How do you use the Mudd? We’d love to hear from you!

Regardless of how you use the Mudd, we look forward to seeing you soon.

The Mudd Library will be hosting a variety of fun and interesting events through the end of the term. From genealogy to video games- there’s something for everyone!

All Things Worth Knowing events begin at 4:30 pm and take place on the first floor of the library. For more information on past topics, take a look at the guide.

We hope to see you at one, or all, of these events!

A new look for the Archives!

We’ve shifted around the furniture in the Archives to maximize the size and enhance the aesthetics of the research space. The new look includes a mini reading room area with two large and well-lit research tables. Another exciting addition to the Archives storage space is a large flat file cabinet. Blueprints, posters, panoramic photographs, and other oversized ephemera now have a preservation-friendly home! A big thanks to Facilities Services and ITS staff for their help with this move.

Stop by the Archives (level B of the library, between floors 2 and 3) anytime Monday through Friday, 1-5pm to see the changes! 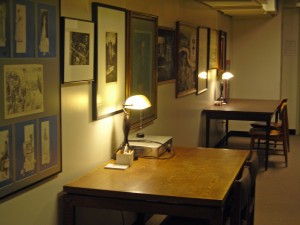 Founders Day at the Library!

There’s been a library at Lawrence since its founding lo, these many years ago. The first Lawrence catalog from 1850-51 says this:

“A commencement for a good Library and Cabinet has been made, and 250 volumes or more secured for the former. Additions will continue to be made and the friends of the institution are hereby requested to make donations to the Library and Cabinet that they may speedily take rank with those which grace and benefit similar institutions in the East.”

In 1854, Amos Lawrence’s uncle-in-law, Samuel Appleton died and left $10,000 in his will for the “the increase of the Library” at Lawrence. In Uncle Sam’s honor, the library was called the “Appleton Library of Lawrence University.”

According to the 1855 catalog, access to the library was limited to one visit and one book per week, but by 1859, the Faculty Library Committee voted that “no students except those of the Senior Class shall be allowed to go into the Library to consult books.”

The library catalog was handwritten and listed books as they were added to the collection. To check out a book,
“On a slip of paper write the title of the book desired, the letters and number, according to the Catalogue, together with the name of the person drawing, and hand it to the Librarian, or his assistant. It would be well to put down several, in the same way, so that if the 1st be not in, the 2nd, or if the second be not there, the third may be drawn, and so on.”

Zelia Anne Smith, class of 1882, was Lawrence’s first full-time librarian and she served in that role from 1883 to 1924. This painting of her (to the right), commissioned by alumni on her death, hangs in the University Librarian’s office.

In 1905, Lawrence received a donation from Andrew Carnegie for the construction of a new library building. That building, located on the site of the current library, was torn down in 1974 to make way for the Mudd.

Winter term got you down? Perhaps a tricycle race is in order. This photograph from the University Archives shows LU students and Appleton children facing off in a tricycle race during Winter Carnival, circa 1977. The Winter Carnival was a tradition that began at Lawrence in the 1930s and continued off and on for decades. Visit the Archives for more information (and check out our exhibit on curling at LU on the first floor of the library).

We have digitized images from some really cool old books for the English 527 History of the Book students. You can find them in the Selections from LU Special Collections digital image collection. The students have written abstracts about their research that you can find in the item descriptions for their book selections. Have fun!

The 160th anniversary of the first day of classes at Lawrence!

This is an important day in Lawrence’s history, this is the 160th anniversary of the first day of classes at Lawrence! On November 12, 1849, the first day of class at Lawrence took place in the Academy building, a site now occupied by the downtown Appleton Y.M.C.A. The student body included males and females, as did the faculty. While Lawrence has had a long history, the Academy building has not. It was destroyed by fire in January 1857, while the Lawrence community was in the Main Hall chapel for Sunday services. This day marks yet another important anniversary for Lawrence.