Michael LaMarca, the Raymond H. Herzog Professor of Science and professor emeritus of biology, died Feb. 9 of complications from a stroke in Rochester, Minn. He was 85.

A specialist in reproduction and developmental biology, LaMarca joined the Lawrence faculty in 1965 and taught with distinction until his retirement in 1995. His career as a scientist and teacher was distinguished by his legendary commitment to the disciplined study of the living world. He was recognized with Lawrence’s Excellence in Teaching Award in 1983.

From the study of amphibians to the exploration of human reproduction, LaMarca guided students for 30 years in both the technical and ethical investigation of biological science. His enthusiastic teaching style impacted thousands of students, especially those he mentored through independent study, many of whom went on to distinguished careers of their own as doctors, researchers and educators.

He served as the scientific director of the in vitro fertilization program at Appleton Medical Center from 1985 to 1995 and his guidance was critical to the impressive successes of northeast Wisconsin’s first such program. Under LaMarca’s tutelage, numerous Lawrence students were able to begin their own research careers there.

LaMarca’s own research earned him a place of influence and honor in the scientific community and took him to laboratories and research centers around the country, including Argonne National Laboratory, the Woods Hole Oceanographic Institution and Harvard University School of Medicine, among others.

A native of Jamestown, N.Y., LaMarca was the first member of his family to attend college, earning a degree in biology from the State University of New York at Albany. He spent four years in the Air Force during the Korean War, serving active duty stateside as a meteorological officer while achieving the rank of lieutenant. He went on to earn his Ph.D in zoology at Cornell University and spent two years teaching at Rutgers University before joining the Lawrence faculty.

He is survived by his wife of 63 years, Joan LaMarca, daughters Cathy Stroebel, Rochester, Minn., and Nancy Gordon, Eden Prairie, Minn., and four grandchildren: Ben, Hannah and Andy Stroebel; and Zach Gordon. He was preceded in death by his oldest daughter, Mary LaMarca.

The family has requested memorials be directed to the National Science Teachers Association or the National Academy of Sciences.

Do you know or work with any talented, multi-interested students? Of course you do! Or are you a student who’s interested in a career in marketing, journalism, public relations, photography or graphic design? The Office of Communications is seeking freshmen, sophomores and juniors to apply for a new fellowship opportunity in our office.

This selective internship, which we’ve named the Resonance Communications Fellowship, will allow students the opportunity to work in several communications disciplines in support of the college’s reputation enhancement and related communications activities. They will be assigned a lead mentor and will have the opportunity to work with several staff members over the course of their fellowship. Fellows will be expected to make substantive contributions to the work of the department, with particular emphasis on storytelling—in a variety of forms—from the student perspective. Fellows will be assigned projects ranging from but not limited to: stories in Lawrence magazine, photo portraits, video editing, student blogs, social media campaigns, building/editing of the lawrence.edu website, admissions materials and promotional print materials for other offices.

Expectations of fellows will be similar to those of salaried staff, including regular, prompt attendance and the preparation of regular progress reports. Since much is expected of them, fellows will receive a salary above that of paid student workers.

If you know of a student who would be a great fit for this new opportunity, feel free to email Resonance coordinator Kasey Corrado at kasey.r.corrado@lawrence.edu and/or refer the student to the position posting on LUWorks.

You may have noticed the parking areas by Mudd Library have been blocked off this week to make room for two cranes to work on the library chiller project. One crane has been set up at the west end of the area by the fountain, while the other has been on the Lawe Street side of the library. There should be enough room to carefully turn around in the south entrance.

If you have any questions or need more information, please contact the facility services office at 920-832-6602.

Presto! and Inside Lawrence: The Conservatory hits the road

This academic year marks the launch of a three-year pilot program titled Presto! The Concert Tour Reimagined, and the continuation of the successful Inside Lawrence events due to a generous grant from the Caerus Foundation.

Both projects provide the Conservatory the opportunity to reconnect with alumni, grow our applicant pool and engage students and faculty in exemplifying 21st-century musicianship through preparation and execution of these tours.

Planning for both Presto! and Inside Lawrence began last October. The Conservatory selected the Lawrence University Wind Ensemble to tour in Minneapolis and the brass faculty to visit Chicago. From March 22 to 24, 57 wind ensemble students, under the direction of Andrew Mast and Matthew Arau, will engage in school visits, outreach and a final public concert. Central High School in St. Paul, Maple Grove High School and Eden Prairie High School band students will work with Lawrence wind ensemble students by watching them perform and participating in question-and-answer sessions. These students will learn more about Lawrence firsthand and what it takes to be a college/university musician.

The wind ensemble’s outreach efforts also focus on those who face mental illness in the Minneapolis area. Chamber ensembles will perform for homeless shelter meals and also serve meals at one of the shelters. Wind ensemble students will also work directly with students at Karner Blue Education Center, a school devoted to addressing the specific needs of students with autism, emotional and behavioral disorders, and cognitive disabilities.

The entire tour will culminate in a free public concert at Trinity Lutheran Church in Stillwater, Minn., on Friday, March 24 at 7:30 p.m. Alumni, students interested in Lawrence, the Stillwater community and Minnesota’s concert-going public will form the audience as the ensemble celebrates its successful tour.

The Lawrence brass faculty kick off the continuation of the Inside Lawrence program by visiting the Merit School of Music in Chicago on Saturday, April 8. John Daniel, Jeffrey Stannard, James DeCorsey, Tim Albright and Marty Erickson will work with brass students in the Alice S. Pfaelzer Conservatory, a tuition-free music school, through workshops, sectionals, chamber music coaching and ensemble work.

In addition to working directly with students, Lawrence alumni from the Chicago area and all Pfaelzer Conservatory students will witness a mid-day performance by the Lawrence brass faculty as part of Merit School’s Live From Gottlieb series. Conservatory faculty are looking forward to continuing to work with Merit School students who will hopefully one day be future Lawrentians. We are thrilled to witness the excitement and support from our students, faculty and the entire campus as we prepare to take the Conservatory on the road to make a difference in these metropolitan communities through ways only Lawrentians know how.

Four area young professionals with Lawrence ties are among this year’s Future 15 winners. Pulse Young Professionals Network and the Appleton Post-Crescent announced the 2017 class, which includes:

The winners will be honored March 2 at the Hortonville Opera House.

Shuttle service back to campus after spring break

As we have in the past, Lawrence will provide motor coach shuttle service back to campus after spring break. Please see details below. The Office of Student Affairs will subsidize the cost of the motor coach bus to make the trip affordable to all students.

Departure times and locations:
Depart Chicago (O’Hare Tollway Oasis on the Illinois Tollway – 10201 Belle Plaine Ave., Schiller Park, Ill. – Northbound side): Noon; it is a 10- to 15-minute trip from O’Hare airport, depending on traffic

Depart Milwaukee (Target Store, 1501 Miller Parkway, Milwaukee): 2 p.m.; it is a 15- to 20-minute trip from Mitchell Airport, depending on traffic

Depart Minneapolis/St. Paul (Target SuperStore, 1300 University Ave. West, St. Paul): Noon; it is a 10- to 15-minute trip from the airport, depending on traffic

Space is limited, so you need to sign up in advance—seats will be available on a first-come, first-served basis. Please plan to arrive at the departure location 15 minutes early to make sure the motor coach will leave at the scheduled time. Look for a large Lamers motor coach (they are usually painted white and red).

LU softball team back for another Polar Plunge 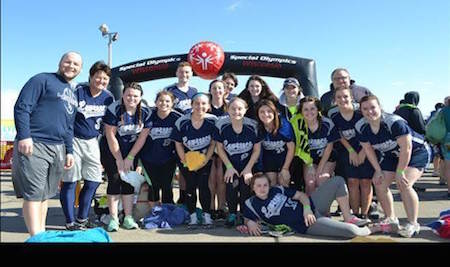 The Lawrence softball team is returning for its fourth straight Polar Plunge to support Special Olympics.

On Saturday, Feb. 18, the Vikings will jump into Lake Winnebago. Anyone interested in donating to the cause can make a tax-deductible contribution online.

Last year, the softball team raised more than $4,500, and it’s hoping to surpass that amount this time around.

Paris Wicker ’08, associate dean of students for campus programs, and Elyse Lucas ’10, lecturer of education, are two of 25 nominees for the 2017 edition of Future 15, an annual list of exceptional young professionals in the Fox Cities sponsored by the Appleton Post-Crescent and Pulse Young Professionals.

In addition to Wicker and Lucas, two other Lawrence graduates are nominees: Fanny Lau ’14 and Oliver Zornow ’10. Visit the Post-Crescent’s website to vote.

Voting runs through Feb. 2. The 15 honorees will be feted March 2 at the Hortonville Opera House.

Note: An earlier version of this post neglected to note that, in addition to being a Lawrence graduate, Elyse Lucas is also a current employee.

Stay safe while shoveling snow during the remainder of winter! Please see this PDF from the Office of Human Resources for snow removal safety tips.

Each winter the Lawrence University Board of Trustees determines the cost of attending Lawrence for the next year. Earlier this week, the board approved a comprehensive fee of $56,133 for the 2017–18 academic year, a 3 percent increase over the 2016–17 academic year. Major components of the fee include tuition at $45,801, room at $4,989 and board at $5,043. To see a more detailed breakdown of the comprehensive fee, please visit our tuition fees & fees web page. This is the third consecutive year that Lawrence has held fee increases to 3 percent or less, a rate significantly under our peer institutions.

As part of next year’s comprehensive fee, starting fall of 2017, we will cover several specific fees that may have prevented students from participating fully in opportunities at Lawrence. For example, student ticket prices to Artist and Jazz Series concerts will be eliminated to assure all undergraduates can take full advantage of these world-class performances. We will eliminate the $250 study abroad fee to make it easier for students to take advantage of the many transformative international study opportunities. The $30 Residence Hall Activity Fee charged to all students in residence will be discontinued. Several other administrative fees and course fees will also be eliminated.

I am aware of the financial challenges that face students and families to fund a Lawrence education. That is why, in addition to managing our expenses and keeping tuition increases as low as possible, scholarships continue to be our core fundraising priority. Thanks to extraordinary support of the Lawrence community we continue to make progress toward our goal of meeting the full demonstrated need of every student.

Lawrence strives to provide a rigorous academic experience in a supportive residential community as efficiently as possible. We are committed to maintain one of the lowest student-faculty ratios in the country and to provide engaged learning opportunities that will prepare our students for post-graduation success in a rapidly changing world. We will use all means at our disposal, from cutting operational costs to building our endowment for scholarship support to eliminating fees in order to make a Lawrence education affordable.