The ensemble has been named the winner in the undergraduate Large Jazz Ensemble category in Downbeat magazine’s 42nd annual Student Music Awards (SMAs) competition, which awards some of the highest honors in jazz education each spring.

“The students in the Jazz Ensemble work together on music that is unique, challenging, and a joy to perform,” said Patty Darling, a music professor in the Lawrence Conservatory of Music who directs the much-lauded ensemble. “This includes a lot of contemporary jazz rep and premier works from Lawrence’s student jazz composers and arrangers.”

The honor was announced Tuesday and appears in the newly published June edition of DownBeat magazine.

This is the second consecutive year that Lawrence has won the top honor in the large ensemble category, and the fifth time in the ensemble’s history that it has been honored by DownBeat.

More on the Conservatory of Music and the LUJE here

This is not small stuff. DownBeat’s SMAs are top-tier honors in the world of jazz education. They are presented in 13 categories in five separate divisions: junior high, high school, performing high school, undergraduate college and graduate college.

Lawrence has been a major player in those awards over the past four decades. To date, students and ensembles in the Lawrence Conservatory have won 28 of these awards in various categories, including undergraduate large ensemble, small group, jazz composing, jazz arranging, solo performance, and jazz vocal group.

Back-to-back wins for the Jazz Ensemble is something the school, its faculty and students can take great pride in, Darling said.

“It is a privilege to work with such talented, dedicated musicians who are so receptive and have such down-to-earth attitudes,” Darling said. “We are incredibly proud of them and I am very grateful to the jazz faculty who are their mentors.”

If you want to see the LUJE in concert, you can catch them at 8 p.m. May 22 at Memorial Chapel. Admission is free.

The DownBeat Student Music Awards were launched in 1978. Judging criteria are based on musicianship, creativity, improvisation, technique, sound quality and balance, excitement, and authority. Recordings are submitted from institutions worldwide and are judged by panels of respected jazz performers and educators who determine the awards in each of the categories. 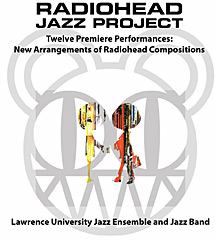 Patty Darling, director of the Lawrence University Jazz Band and lecturer in music, has been named one of nine recipients of an $8,000 fellowship through the Wisconsin Arts Board’s 2011 Individual Artists Program.

The fellowship recognizes Wisconsin artists for significant contributions to the fields of literary arts, music composition and dance choreography.

Selected from among 141 applicants state-wide, Darling, a 1985 Lawrence graduate, was the only composer awarded a fellowship. She submitted original compositions scored for symphonic band, percussion ensemble and jazz ensemble with her application. She has been a member of the Lawrence Conservatory of Music faculty since 2007.

The fellowship is designed to support the creation of new work, complete work in progress and/or pursue activities that contribute to the recipient’s artistic growth. Darling will use her fellowship to prepare a dozen of her existing original works for publication, to compose four new educational compositions for middle school and high school jazz ensemble that will be performed in December by several local schools and develop a personal website to bring her compositions and recordings to a larger audience.

Awards were determined by three panels of arts professionals, based primarily on the artistic quality of the applicants’ work samples.

The Wisconsin Arts Board is a state agency that nurtures creativity, cultivates expression, promotes the arts, supports the arts in education, stimulates community and economic development and serves as a resource for people of every culture and heritage. Since 1973, the Arts Board has supported state artists and arts organizations with funds from the state legislature and the National Endowment for the Arts.

APPLETON, WIS. — Mick Jagger and Keith Richards may finally get that “satisfaction” they famously sought in song.

The Lawrence University Jazz Ensemble and Lawrence Jazz Band, under the direction of Fred Sturm and Patty Darling, respectively, present “STONE AGE: Music of the Rolling Stones” March 12 and 13 at 8 p.m. in Stansbury Theatre. The concert is free, but due to limited seating, tickets are required and are available through the Lawrence box office, 920-832-6749.

“This program is going to be played all over the world in the next few years, and we’re thrilled to launch it here in the states,” said Sturm, director of jazz and improvisational music at Lawrence.

The concert will include such Jagger-Richards classics as “(I Can’t Get No) Satisfaction,” “Honky Tonk Women,” “Paint It Black,” “Ruby Tuesday,” and “Wild Horses,” among others.

“We won’t be imitating the Stones’ recordings like a ‘cover’ band would,” said Sturm. “Instead, we’ve re-casted them with fresh harmonies, unique rhythms and the power and colorful shadings of an 18-piece jazz ensemble. But fans of the Stones will still be able to recognize the tunes.”

The concert owes its genesis to Ries, a composer and saxophonist who played in the Rolling Stones’ horn section on their “No Security” tour in 1999. In a bout of experimentation, Ries decided to add a jazz arrangement to several Stones’ songs, resulting in the 2005 album “The Rolling Stones Project: Music Of The Rolling Stones.” A second follow-up disc, “Stones World,” was released last October.

Sturm and Ries crossed paths in 2003 after Sturm was named the recipient of the prestigious 2003 ASCAP/IAJE Commission in Honor of Quincy Jones. For the premiere of his work “Abstract Image” in New York City, Sturm assembled an all-star ensemble of jazz luminaries, including Ries, who appeared as the featured saxophonist.

In preparing for the concert, Sturm and Darling exposed their students to recordings of the original Rolling Stones renditions, the Ries and Danish versions as well as treatments that were recorded by artists ranging from soul singers Otis Redding and Aretha Franklin, pop star Britney Spears and jazz great Oscar Peterson.

“Performing and arranging classic and contemporary pop music is an important focus of the Lawrence jazz department,” said Darling. “Our students need the tools and vocabulary to explore the music of their own time. We’re examining process very closely, articulating how jazz players and composers can reconstitute any piece of music in their own voice.”

“Jazz musicians have been fascinated with standard tunes going back to Tin Pan Alley and the American Popular Songbook of the 1930s, ’40s, and ’50s,” Sturm added. “Miles Davis, Herbie Hancock, and other jazz greats have recorded their own treatments of the ‘New Standards’ in contemporary pop music. In that same creative spirit, we’ll be putting our own interpretive stamp upon these great Rolling Stones hits.”